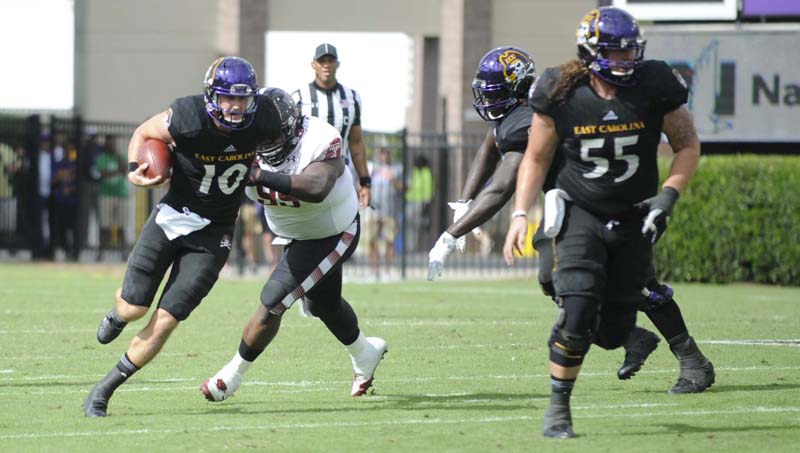 Thomas Sirk opts to keep the ball and run it himself against Temple last week.

ORLANDO, Fla. — Saturday East Carolina will travel to No. 22 Central Florida in an attempt to break its two-game losing streak and end the Knights’ unbeaten start

The Pirates, like they have so many times this season, will face a high-caliber offense. ECU’s second game of the season came against the now third-ranked offense for West Virginia. It faced USF’s No. 10 offense two weeks ago.

ECU will not receive any kind of break as it hits the road to face the No. 8 offense in the nation this time around. The Knights are lead by sophomore quarterback McKenzie Milton, who has 1,165 yards passing in just four games this season. In addition to a fairly successful passing game, UCF has a run game that is just as effective.

“They have a lot of speed, and what they do offensively is they like to stretch you horizontally in the run game, and then they will stretch you vertically in the passing game,” head coach Scottie Montgomery said. “They are playing at a higher level on offensive than we have seen this year. They are averaging a ridiculous amount of yardage per play and last week. I think they had under 50 plays but they had so many big plays in the passing and running game.”

The Pirates have been working to build a stronger defense throughout the season. They have made changes in players starting and coaching positions. While the defense has been making positive strides, it is hard to spot where weaknesses still lie when playing multiple nationally ranked offenses.

The defensive changes shined through last week as redshirt freshman linebacker Aaron Ramseur lead the Pirates in tackles. Then, on the Owls’ second drive, he intercepted a pass in the red zone, giving the ball back to the offense.

While the Pirates hit the road this week as the underdogs, facing an undefeated American Athletic Conference opponent, there is still hope of picking up a win. There’s hope given the bad blood between the Knights and Pirates. Perhaps their rivalry will be the shot in the arm ECU needs.

This will only come with the ECU offense that stood out on the road in Connecticut and the defense that has continued to improve.

“I think that we are trying to fix (the defense) week to week. We have got to get our personnel in that should be playing at all times,” Montgomery said. “But it is going to be a growing issue for us to go forward. We are going to have to fix a lot of those small problems that we have and a lot of it is directly related to tackling. I think that Coach (Robert) Prunty has done a good job of reducing what we do.”

As the Pirates prepare to travel this weekend to UCF, Montgomery said the team is continuing to grow its confidence. The AAC battle will kickoff at 7 p.m. Saturday in Orlando.