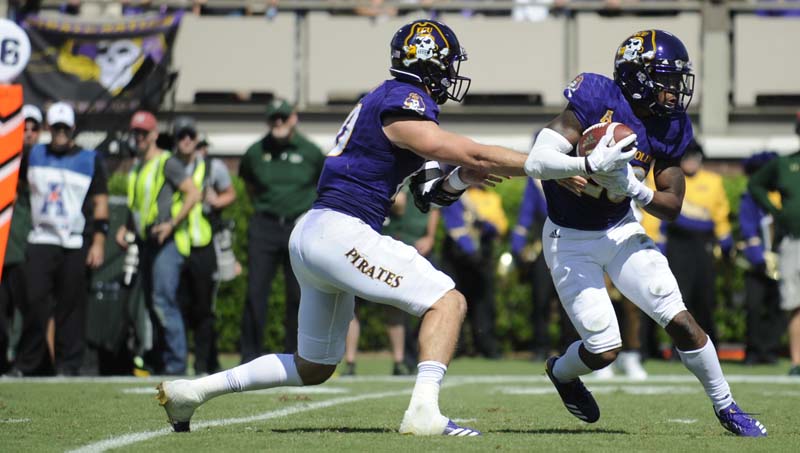 GREENVILLE — East Carolina, loser of three in a row, is getting a glimpse into its future. Darius Pinninx had almost 100 yards rushing at Central Florida this past weekend. Aaron Ramseur, for the second week in a row, led the team in tackles.

It’s not an ideal situation for head coach Scottie Montgomery. He’d like to be fielding more experience, but the younger players are earning their way into higher spots on the depth chart.

“If anything, I like to play older players. I respect the guys that have been in the grind for three and four and five years and the ability for them to get a chance to play, especially if they’ve been here,” Montgomery said.

At the beginning of the season, there weren’t very younger players starting in each game. As the losses pile, it’s the underclassmen shining most. While injuries do play a part in the starting lineups, it is not the reason in every situation.

The Pirates’ running back core has been the biggest point of the youth taking over. With the runs being split between freshman Pinnix and sophomore Hussein Howe, it doesn’t leave much space for junior Derrell Scott when he returns from his injury this week.

Scott racked up 36 carries for 99 yards from the start of the season to the USF game before being sidelined with a groin injury. Pinnix only carried the ball two more times with 38 carries and picked up 154 yards. In addition, Howe has 44 carries for 190 yards.

While it is difficult to assess what Scott’s stats would look like if he hadn’t lost playing time, it gives the coaching staff something to think about before the homecoming game against BYU on Saturday.

On the other side of the ball, younger players have starting making a name for themselves on defense. Redshirt freshman Chance Purvis, sophomore Alex Turner and sophomore Jalen Price are taking a lot of snaps at defensive tackle.

At the will linebacker position, Ramseur has become a core component of the Pirates’ defense as a redshirt freshman. Sophomore Colby Gore has stayed a starting cornerback for the Pirates with sophomore Tim Irvin and redshirt sophomore Devon Sutton at nickelback.

While younger athletes shining is an indicator of a bright future, it doesn’t necessarily help when veterans are struggling now. Montgomery said that the team is still building and that older players are trying to help the team as much as they can in their time left at ECU.

The veterans will hope to step up to the bar set by the younger Pirates. With the next loss being the nail in the coffin for ECU’s bowl chances, the players don’t have much to work toward. However, the seniors can aim at matching or improving on last year’s three-game win total.