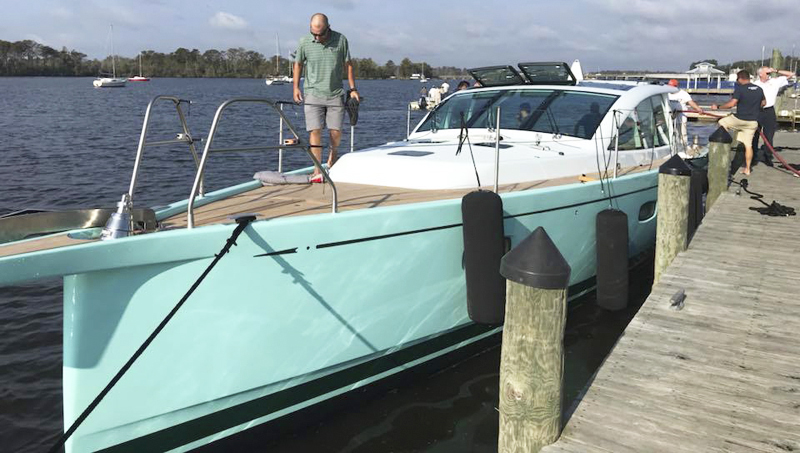 CELEB STATUS: Crews tested out the engines of Jimmy Buffett’s new Surfari 48 in Washington before it soon makes the trek to southeast Florida.

World-renowned musician Jimmy Buffett said, or rather sang, it best. “Sail away” is exactly what he’ll be doing in a new $3 million, 48-foot Surfari.

Buffett’s new ride was designed and built right here in Washington at Pacific Seacraft. The entire process was about a two-year process, according to Steve Brodie, owner of Pacific Seacraft.

“It’s a new design, a new concept. Fairly unique in that it’s a performance sailboat, but it also has twin engines,” Brodie said. “This was built as a new line. We hope this is the first of at least several of these.”

Because Buffett’s boat is a new design, the employees at Pacific Seacraft first had to build molds — naval architects were creating a boat with speed and maneuverability in mind.

“It’s a very different boat than the boat that we started with. There have been a lot of changes and additions,” Brodie said.

During the building process, employees at Pacific Seacraft tried to keep things under wraps. Any visitors to the West Second Street operation were not allowed to take photos of even the molds as the design was created and tweaked.

“That was for a number of reasons. One was just we kind of wanted to be able to concentrate on the build, and given who it was being built for, there was a lot of interest. We were just sort of trying to avoid turning it into a circus,” Brodie explained. “We intentionally kept it as quiet as we could without a whole lot of success.”

This 48-foot wonder is now out in the spotlight, with sleek turquoise lines that are almost ready to hit the waters of southeast Florida. Brodie wasn’t sure the exact date, but he said the boat will be transported to Palm Beach in the near future, where it will then spend time between the Florida coast and the Bahamas.

As for the opportunity to work for a celebrity, those Washington-based boat builders wouldn’t trade it for the world.

“It was obviously a lot of fun for us and our employees. We don’t typically get to mingle with celebrities, and he was just as nice as he could be. Very down to earth, very accommodating, so really a class-act guy,” Brodie said.

“There were a lot of, sort of, ancillary people that we were dealing with, in addition to him, so it complicated things at times. But, all in all, it was a very pleasurable experience with him. He couldn’t have been any nicer.”

Smoke on the Water takes over Washington waterfront