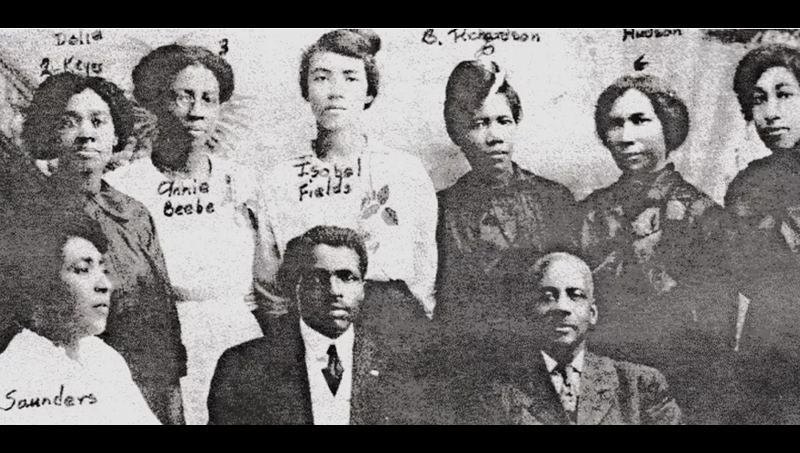 Peter Simon Jones is a well-known name in the Washington area — the namesake of the former P.S. Jones High School and now the middle school.

A highly esteemed educator, Jones is known to some as the “Father of Colored Education” and was a pioneer in education for African-American students in Washington during segregation. Jones served as principal of P.S. Jones High from 1927-1949.

The high school was originally located where the Beaufort County Ed Tech Center is now on Bridge Street. It was one of 300 historically black high schools in North Carolina.

“The legacy of our beloved school lives on via our indelible memories, our quality yearbooks and our memorabilia,” wrote Betty Moore, an alumna who serves on the museum committee, on behalf of the alumni group. “We are most appreciative to the Beaufort County Board of Education and the Beaufort County Ed Tech Center for honoring this unique era of P.S. Jones High School by providing a room.”

P.S. Jones High may have had humble beginnings, but it was a school deeply rooted in the community it served. In the 1920s, A.G. Davis began a brick fundraiser to build a school — quite literally, brick by brick — for black students. Back then the bricks went for a penny each.

Washington Colored Public School was born in the early 1920s, with three separate buildings for primary, elementary and high school grade levels. WCPS’ first class graduated in 1926, and the year after, Jones took over at the helm.

After Jones’ retirement in 1949, W.M. Daniels Jr. followed in his footsteps, and also headed up the construction of a new wing. The school’s name was changed to P.S. Jones in 1950.

“The community felt it only fitting to name the school after Professor Jones who had dedicated 22 years of his life faithfully serving the community and making a difference in the lives of the students,” according to information from the alumni group.

Although the U.S. Supreme Court ruled school segregation unconstitutional in 1954, integration did not come to Washington City Schools until 1968, at which time P.S. Jones High was changed to solely a middle school, and Washington High School was constructed soon after. For years following, black residents in Washington fought to keep the P.S. Jones namesake alive — a cause still close to the hearts of many alumni.

The name, Peter Simon Jones, now lives on through the newer middle school on Market Street Extension, as well as through the museum at Ed Tech. It’s a source of great pride for the Yellow Jackets.

“It’s exciting to preserve the legacy of the school and the alumni. Having items that represent the many years of the school and the aspects of being a student will be special for not only the P.S. Jones alumni, but for others as well,” Beaufort County Schools Superintendent Dr. Don Phipps said. “P.S. Jones has a strong, storied history, and the stories that can be told and the history recounted will make those memories live on.”