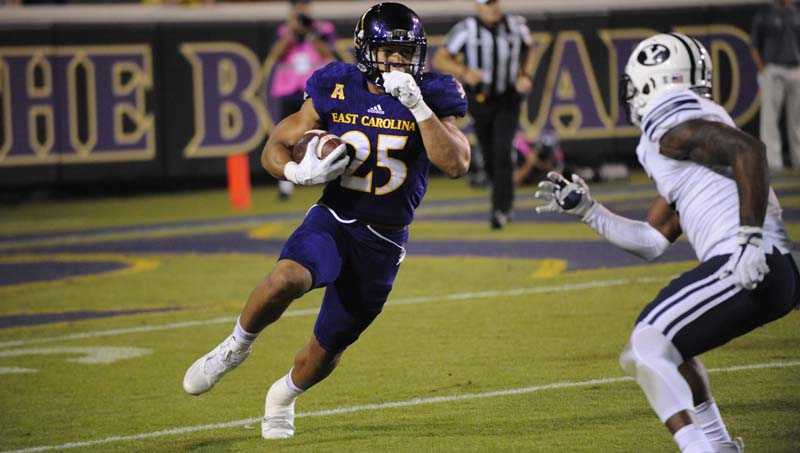 Junior running back Devin Anderson runs the ball against BYU. He recently returned from injury. ECU hopes getting healthy during its bye will be an advantage at Houston.

HOUSTON — The sports world has been squarely focused on one city for the past few days: Houston. The Astros emerged from a classic World Series with their first-ever title. Texans rookie quarterback Deshaun Watson tore his ACL and will miss the remainder of the NFL season.

Just before all of that attention, the Houston Cougars earned headlines by knocking off American Athletic Conference frontrunner South Florida.

Now East Carolina, coming off its bye week, heads that way for a Saturday-afternoon matchup with the Cougars.

Last week, Houston faced off with the same South Florida team that destroyed the Pirates at home just weeks prior. The Cougars had a trick up their sleeve, however, as they brought out backup quarterback D’Eriq King to contribute to the run-game.

King helped lead Houston to a victory over the nationally ranked team. He completed 12 passes for 137 yards and a touchdown. The biggest contributor of King’s play came from the ground game. He was the Cougars’ second leading rusher with 20 carries for 83 yards and two touchdowns.

While the Bulls had no time to prepare for King, the Pirates have had an extra week to do so. ECU may not know who will be the starting quarterback Saturday, but now the defense has had time to watch film and prepare for whoever lines up under center.

“Defensively, everything that we did last week and preparing for last week, we kind of got a curve ball by (D’Eriq) King being added to the mix as a quarterback/wide receiver speed-sweep guy,” head coach Scottie Montgomery said. “I thought it was a really good strategy. It proved to be great for them and he did a lot of things with his feet, but he also scrambled outside of the pocket on the biggest play of the year from them on fourth-and-20 something and was able to complete a ball down the field.”

In addition to the chance at playing a mobile quarterback, ECU will have to prepare to face sophomore running back Mulbah Car. Last season, Car picked up 206 yards on 49 carries with two touchdowns. He sits at 39 carries for 264 yards and two touchdowns with three games left this year.

Car lead the Cougars with 18 carries for 137 yards and a touchdown last week.

ECU currently sits at the back of the pack in the FBS in terms of rushing defenses, but this week the Pirates will have to improve in stopping the run if they have any chance of picking up a win.

Robert Prunty has had to face numerous problems since stepping into the defensive-coordinator role. Montgomery said that Prunty has done a great job at helping the ECU defense stay focused.

“They pay a lot of attention to the detail of game planning and understanding the game plan. But just realizing that it doesn’t necessarily always take the best talent in the world to win,” Montgomery said. “What it takes are guys that continuously come in and do their job, great character guys being exactly where they are supposed to be doing exactly what they are supposed to be doing.

“So he has done a great job of stressing it and I think it is important for us to continue the momentum from last weekend to this weekend.”

The Pirates will kick off at noon Saturday at TDECU Stadium in Houston. ECU will look to pick up its second American Athletic Conference win for even more momentum to finish the season.