Pirates compete, but still blown out at Houston 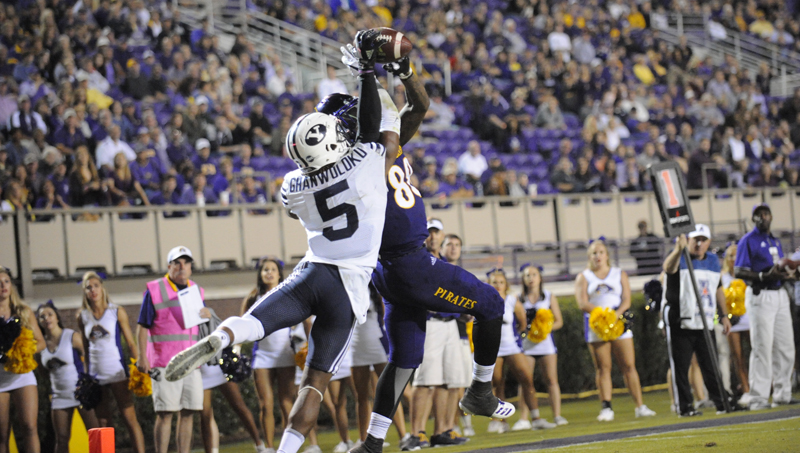 Trevon Brown goes up for a grab in the end zone against BYU. He caught a pair of touchdowns from Gardner Minshew at Houston.

HOUSTON — East Carolina looked as if it found something two weeks ago when it defeated BYU on homecoming. The Pirates, coming off their bye week, went down to Houston, but were trounced, 52-27, and officially eliminated from bowl eligibility.

It came down to moments of poor execution. Quarterback Thomas Sirk missed a throw on a sure touchdown on the first play from scrimmage. Questionable management with timeouts led to kicker Jake Verity missing what coach Scottie Montgomery referred to as a “bonsai field goal” as the first half came to a close.

“On offense, we came out with an aggressive game plan to start the game, and unfortunately we couldn’t hit the big plays that we had schemed up,” head coach Scottie Montgomery said in the weekly press conference. “For a couple of weeks, we’ve done a really good job of executing it in practice, and we got to the game and did not execute it.”

ECU notched 27 points against a good Houston defense. It commanded the clock with over 40 minutes of possession. A 9-yard touchdown connection from Gardner Minshew to Trevon Brown even had the Pirates within reach, 28-17, six minutes into the second half.

But they were still blown out as the Cougars used a handful of explosive plays to shred the Pirates’ defense.

Most of this deficit came from turnovers. ECU turned the ball over three times Saturday. After going three-and-out on their first possession, and having the defense force a three-and-out in return, Sirk threw an interception with around eight minutes left in the first quarter.

Houston capitalized on the turnover as Duke Catalon picked up the Cougars’ second touchdown of the game on the very next play from the ECU 22-yard line. The Pirates then switched quarterbacks, bringing Gardner Minshew in. Montgomery said Minshew getting a shot in the game was scripted beforehand.

Minshew went on to lead ECU to a 16-play drive that resulted in a field goal, putting ECU on the board. In fact, the junior offensive captain set program records for passes attempted and completions.

“I thought two weeks ago against BYU, what we saw in Gardner was a much calmer quarterback than we did in the first couple of games that he was in. Any situation he showed up in games, I thought he was a little bit frantic in the pocket,” Montgomery said.

“Then I felt like we had got into a little bit of rhythm with him whether it was the interior runs connected to the RPOs (run-pass-option) or just some of the third down plays that he was making.”

Down 28-3, Minshew once again helped to sustain a drive as the Pirates’ offense marched down the field and scored a touchdown in just under two minutes. The defense quickly shut down Houston in a three-and-out, but a 14-play drive would end in the Cougars’ favor as Jake Verity missed the field goal right before halftime.

The Pirates came out in the second half with a new mentality. They got the ball for the first possession of the second half and scored a touchdown, cutting Houston’s lead to 28-17. The ECU defense forced another three-and-out, but was let down when running back Devin Anderson fumbled at the Houston 24-yard line.

Houston quickly picked up its second touchdown off of a turnover jumping back up to a 42-17 lead. Things didn’t improve for the Pirates as Minshew threw the second interception of the night, which was returned for a touchdown. Outside of the turnovers ECU kept up with the Cougars, but in the end poor execution resulted in another ECU loss.

“Coverage definitely has to get better. We’ve got to coach it better,” Montgomery said. “Offense, defense, special teams wise, we have a long way to go to get better but we do have some things that we can build off of from this past game.”

ECU has shown signs of improvement since getting manhandled in its first few outings. The Pirates will get another opportunity to show strides Saturday when they host Tulane.