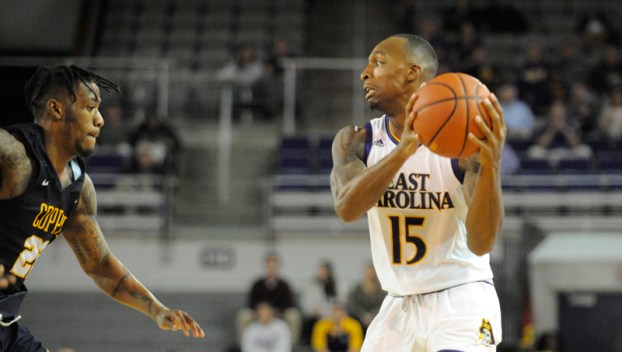 GREENVILLE — It was an emotional night for ECU Wednesday in Minges Coliseum. The Pirates fell to the Radford Highlanders 73-66.

The first half was filled with behavioral issues for both the Pirates and the Highlanders. Radford racked up nine fouls and ECU had a dozen. Justin Whatley, freshman forward, acquired four fouls within the four minutes that he played.

“Sometimes with young, new players, when they get excited, they come out of character,” head coach Jeff Lebo said. “Because they got excited, it hurt us. We had a lot of self-inflicted wounds.”

Isaac Fleming, junior guard, was charged with his second technical foul, as well as his fifth and final personal foul with a minute left in the second half. On Saturday’s game, Lebo praised Fleming for playing with the emotion that proved detrimental in Wednesday’s loss.

“We’ve talked to him a lot about it and it’s something he’s got to work on. It hurts himself and it hurts the team,” he said.

Although the Pirates suffered a loss, they did not go down without a fight. Star players Kentrell Barkley and B.J. Tyson flowed well, per usual, to elevate the energy. The two combined for 29 points. Tyson played all but two minutes of the game.

This game was especially emotional for the upperclassmen duo.

Tyson mentioned that the fight at the end of the second half is what made this loss sting the most.

“We went into halftime down fourteen and then, by the beginning of the second half, we cut it down to seven,” said the senior guard. “When we got in at half time I was telling the guys, ‘We’re only down by seven. We can make a comeback. We’ve got to show them how to play Pirate basketball.’”

Barkley and Tyson met with the media following the first loss of the season. Barkley left in the middle of the press conference. Before getting up and leaving in the middle of an answer from Tyson, Barkley explained that he felt like the Pirates let Radford get under their skin.

“When they got to us, they took us out of our game,” he said.

Just as well as Tyson compliments Barkley on the court, he did just as swiftly off the court tonight.

“Pardon me for my brother. Like I said, y’all can tell it’s really hard for us,” Tyson apologized.

Lebo is persistent in the two-day turnaround to nip their problems in the bud and build from the loss acquired.

“Controlling your emotion in an emotional game is just something you have to have as a mature player. It is a requirement if you want to be good. We didn’t show that tonight at some spots,” Lebo said.

Radford ended the first half on a 9-0 spurt in the first half. Donald Hicks’ 3-pointer punctuated it, producing a 24-10 lead with 8:32 left. ECU whittled away at the deficit in the second half before Shawn Williams’ triple knotted the game at 49-49 with 12:28 left.

Williams was 2-for-7 from long range, but his second make from behind the arc gave ECU its first lead of the game — 52-51 with just over 10 minutes to play.

Radford rallied once the Pirate sharpshooters began missing their mark, though, and closed out the win in Minges.

ECU will host Central Connecticut at 7 p.m. on Friday.

GREENVILLE — Football has been a part of Jimmy Williams’ life for about as long as he can remember. Formerly... read more