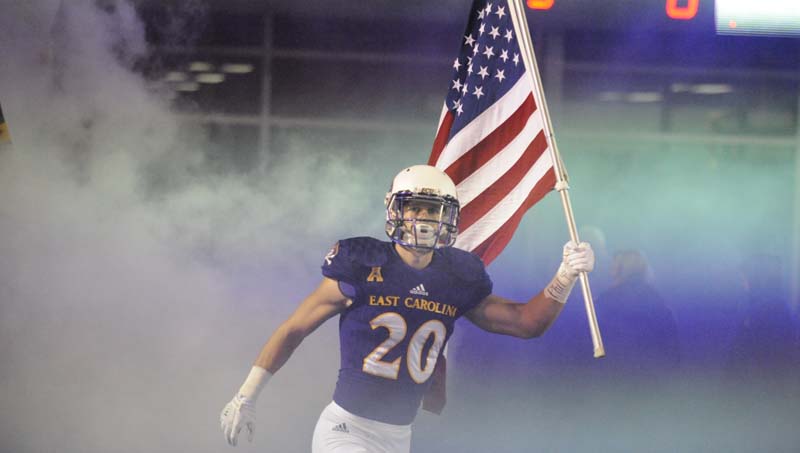 GREENVILLE — This weekend fans will file into Dowdy-Ficklen Stadium for the last time this season as East Carolina hosts Cincinnati in its last home game.

Both teams have struggled this season as the Bearcats have a 3-7 record and the Pirates sit at 2-8. ECU’s hope is to match last year’s three-win total while sending off its 27 seniors on a high note.

Last week, the Pirates dropped a heartbreaking loss in overtime against Tulane, 31-24. ECU has played a total of 14 overtime matchups, and split them with seven wins and seven losses.

“We are definitely getting better on offense and defense in some different areas we haven’t put it all together,” head coach Scottie Montgomery said. “This (Tulane game) was the perfect opportunity for us to get a November-style win. We ran the ball well and didn’t make just enough plays.”

Cincinnati currently owns a six-game win streak over the Pirates, but has been in rebuild mode as of late.

The Bearcats have a lot of new players since last year’s matchup and only two returning starters this season. ECU will face another mobile quarterback in Hayden Moore. So far this season, Moore has only had two games in which he’s completed less than 50 percent of pass attempts. He has picked up over 2,000 yards with 15 touchdowns. He also has close to 300 yards rushing for three touchdowns.

Moore has a couple of weapons to help him in running the ball in Gerrid Doaks and Mike Boone. Boone has picked up 318 yards this season on 81 carries with four touchdowns. Doaks, a redshirt freshman, has only had six more carries than Boone, but has exploded with over 500 rushing yards for two touchdowns.

“Offensively, really impressed with the running backs that they have. Not only Doaks, No. 23, but also No. 5 Boone,” Montgomery said. “They’ve done a good job getting the ball downhill. Doaks has given them a different change up than I have seen them have in the past.”

After losing last week in a do-or-die fourth-down situation, ECU has seen the importance of utilizing weapons inside the red zone. While the Pirates may have a better idea of who to target, they have also lost options as workhorse receiver Quay Johnson suffered a season-ending injury in Saturday’s game.

ECU will kickoff its last home game of the season Saturday at noon. The Pirates hope motivation stemming from senior day can will them to a win.

“The biggest thing motivating them right now is its senior week,” Montgomery said. “We have a lot of young guys playing, we have a lot of older players that are either injured or not playing but they want to go out and perform well for these seniors.”