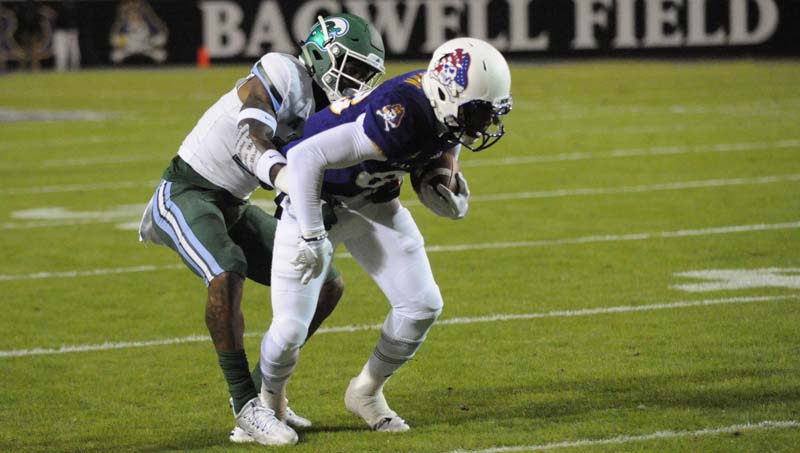 GREENVILLE — On senior day in Dowdy-Ficklen Stadium, it was East Carolina that stole the show with the best offensive game the Pirates have had all season long crushing Cincinnati 48-20.

The defense smothered Cincinnati throughout most of the afternoon, giving the offense good field position and plenty of momentum.

“It feels great to see the guys dial in and all come together,” senior linebacker Jordan Williams said. “Seeing the offense click, the defense click, it just means a lot.”

The Pirates kicked off the game with a 65-yard scoring drive in just six plays. ECU immediately began to utilize the ground game, handing the ball off to Darius Pinnix for the first two downs. Quarterback Gardner Minshew then completed four straight passes, with Tahj Deans catching the last of them for a 23-yard touchdown completion.

The Pirates took over after forcing the Bearcats to punt from inside their own 15-yard line. They then marched right back down, going 76 yards for another touchdown to make it 14-0.

ECU continued to dominate on defense. The first quarter would come to an end with Cincinnati far behind ECU in offense yardage as the Bearcats only picked up 13 yards to the Pirates’ 190.

Jimmy Williams — the former Washington quarterback playing his last game in Greenville — extended the lead by trudging through a plethora of defenders. Cincinnati finally answered — and did so quickly — with a 75-yard reception by Khalil Lewis to cut the deficit to 21-6.

JaQuay Savage caught a touchdown to close the gap further, bringing the score to 21-13 with less than two minutes until halftime. Jake Verity nailed a field goal before the break. It marked the first time since the win at UConn that ECU took a lead into halftime.

Already with 89 yards receiving, Trevon Brown broke loose for his second 95-yard touchdown of the season. He went on in the game to set the American Athletic Conference record for the most receiving yards, 270, while passing former Pirate Justin Hardy’s record.

“I played this game like this was my last,” Brown said. “So, I mean, we just reiterated it to the underclassmen, that you gotta play your heart out because when your time comes, you want somebody else to do the same for you.”

Cincinnati cut it to 38-20 when Jerron Rollins capped off a 72-yard series before the start of the fourth.

Verity drilled a 50-yard field goal and Brown nabbed a 20-yard score from Reid Herring to tack on the last 10 points.

“I can’t say enough about our seniors finishing here in Greenville at Dowdy-Ficklen Stadium on Bagwell Field,” Montgomery said. “Just really happy they get to go out the rest of their lives and remember the last time being on the field with all of their brothers, and their coaches, and their fans and family around them. And to go out like this, it’s just something special.”