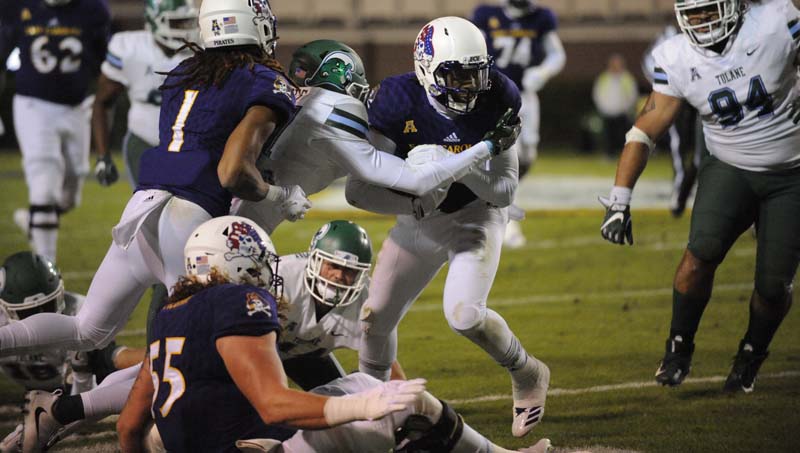 GREENVILLE — Players set for at least one more season had the most significant impact in Saturday’s win over Cincinnati, helping to send off East Carolina’s seniors with a home win.

Pride in the program and what the elder Pirates have accomplished is what motivated everyone from the freshmen to the seniors.

“Just a lot of pride went into (this game),” head coach Scottie Montgomery said. “Didn’t hear very much from the seniors. It was more about the young guys saying, ‘listen y’all have carried us, y’all have done this, you guys continue to lead us, but we got you. We’re going to do what we can to make sure you get it.’”

Emotions ran high for many seniors as they played through their final game at home. Some seniors had tears in their eyes walking toward the tunnel, while others just remained on the field a little longer than normal to say their final goodbyes.

“I thought I was going to be prepared for it,” ECU senior and Washington product Jimmy Williams said. “You hear the fight song, it’s the last time. You see the fans leaving and it’s the last time. And it’s just like you look back at the field and it’s just like there ain’t no more ECU … So I can’t describe it. I don’t know. I just started crying.”

The seniors showed the signs of the wars they’ve been through in the last few years. Williams worked through a nagging back injury to score a touchdown. Others, like Quay Johnston and Davon Grayson, were ruled out entirely.

It was the electric connection between juniors Gardner Minshew and Trevon Brown, as well as rookie Darius Pinnix running the ball, that pushed the Pirates past the Bearcats, 48-20.

The biggest underclassmen impact was on offense this past weekend. Although Minshew started at quarterback, that didn’t keep graduate transfer Thomas Sirk off the field. Sirk stepped in as a tight end Saturday, hauling in two receptions for 21 yards. Minshew’s four touchdowns marked the most he’s thrown at ECU. He also completed 31-of-45 passes for 444 yards.

While a 444-yard game for four touchdowns may be hard to outshine, junior receiver Brown did so by breaking former Pirate Justin Hardy’s single-game receiving yards record at ECU. He also set a new record for the American Athletic Conference.

“It’s just a blessing,” Brown said. “These guys rally around me. My teammates believe in me, and I believe in them.”

Pinnix and sophomore Hussein Howe led ECU in rushing with 26 carries for 83 yards collectively. Howe had a touchdown.

The underclassmen and Montgomery spoke a lot about wanting to make one last stand for all of the seniors, and give them a positive memory to leave Bagwell Field with. By putting up the most points they had all season, it was pretty clear that they had done just that.

“Before the game, it was as quiet as I’ve ever had it when I walked up,” Montgomery said. “Because I knew everybody was so focused on making sure those seniors that walked up front got exactly what they deserved. There was a lot that went into it.”