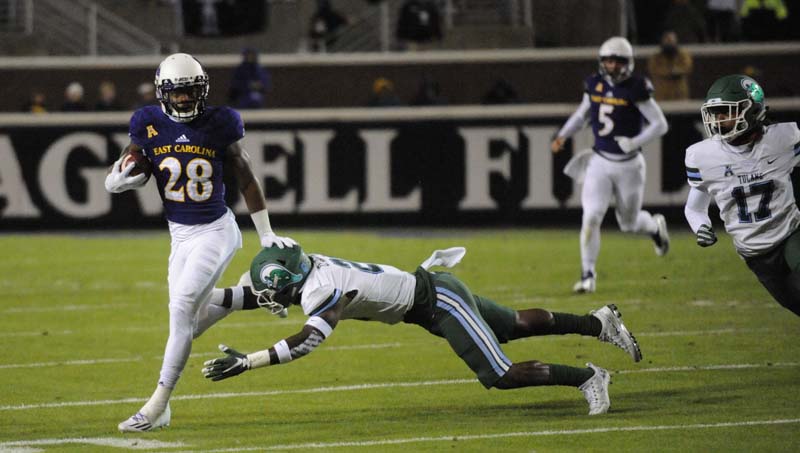 MEMPHIS, Tenn. (AP) — Riley Ferguson threw for three touchdowns and Darrell Henderson scored twice and rushed for 122 yards as No. 17 Memphis dominated East Carolina 70-13 on Saturday in a tuneup for the American Athletic Conference championship game.

The victory provided the Tigers (10-1, 7-1 American Athletic Conference, No. 20 CFP) their first undefeated home season at Liberty Bowl Memorial Stadium since it opened in 1965. Memphis won its sixth straight, the lone loss of the season coming Sept. 30 against No. 13 Central Florida, which the Tigers will face in next Saturday in Orlando, Florida.

Even when the Pirates (3-9, 2-6) were able to reach the end zone – the first time on a 33-yard pass from Gardner Minshew to Jimmy Williams in the third quarter — the ensuing extra point was blocked. And to make things worse, when the Pirates kicked off, Memphis’ Tony Pollard returned it 100 yards for his fourth kickoff return for a touchdown this season.

Not long after that, Memphis coach Mike Norvell pulled Ferguson, and the Tiger starters. Ferguson passed for 299 yards.

Memphis scored on its first play from scrimmage on an 89-yard pass from Ferguson to Anthony Miller. The Tiger offense was operating with little resistance from the Pirates who have one of the worst defenses in the nation.

Henderson scored from 4 yards on the next possession.

By the time safety Jonathan Cook returned an interception for a 31-yard touchdown, Memphis was up 21-0, less than 11 minutes into the game.

East Carolina: The Pirates, who were looking to build on last week’s win over Cincinnati, never got anything going in the game. Not only did they fall behind early, but their offense was stagnant, finishing the first half with only 27 yards rushing and 193 overall. In two seasons at ECU, coach Scottie Montgomery is 6-18.

Memphis: The Tigers certainly didn’t show any letdown after clinching the conference’s West Division crown last week. And there was no indication of them looking ahead. When the undefeated Knights escaped with a 49-42 win over South Florida on Friday, Memphis lost its chance to host the title game.

East Carolina: The Pirates look toward next season.

Memphis: The Tigers lost 40-13 to UCF in September.