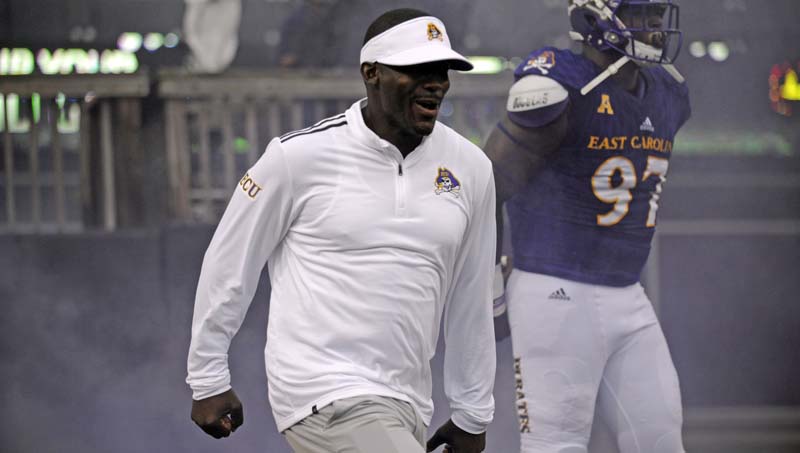 Scottie Montgomery storms out of the tunnel for ECU’s season opener back in September.

At the close of East Carolina’s 2017 football season, second-year head coach Scottie Montgomery made a promise of postseason play in 2018. He’s confident in the ability of his team to at least double its win total and earn bowl-eligible status by this time next year.

But after back-to-back 3-9 seasons, that’s a promise that’s hard to take seriously.

Last season, the less successful record was easily blamed on the lack of time Montgomery had with the team and lack of recruiting. There should have been improvement this season. Montgomery sought the help of junior-college and graduate transfers to help bridge the gap in experience left by the number of Ruffin McNeill’s last recruits that simply aren’t with the program anymore.

Of course, this season’s schedule was extremely difficult, but a better record is expected out of a coach with his first season under his belt and his first full recruiting class aboard.

The Pirates closed out this season with a 70-13 loss on the road to nationally ranked American Athletic Conference rival Memphis. The last time ECU has experienced a 50 plus-point loss was in 2011 at Houston, 56-3, but even with a major loss like this, ECU closed the year with a 5-7 record.

Yes, ECU did switch from Conference USA to the AAC, but that was in 2014, two years before Montgomery came in as a coach for the Pirates. So why is the team struggling so much now? Maybe it’s because ECU has struggled with maintaining a consistent quarterback since Shane Carden was slinging the ball.

Those problems should not be the precursor for two 3-9 seasons, which until Montgomery arrived, has not happened at ECU since 2004.

Throughout the season, Pirate fans all over have expressed their anger with athletic director Jeff Compher receiving a contract extension. It may have been a premature decision, but not all the blame for these non-competitive seasons lies on Compher.

If Montgomery wants to promise postseason play, it should be after showing progression in the overall records. Historians will compare his tenure with the Pirates to Thompson’s if there isn’t tangible growth in the next year.