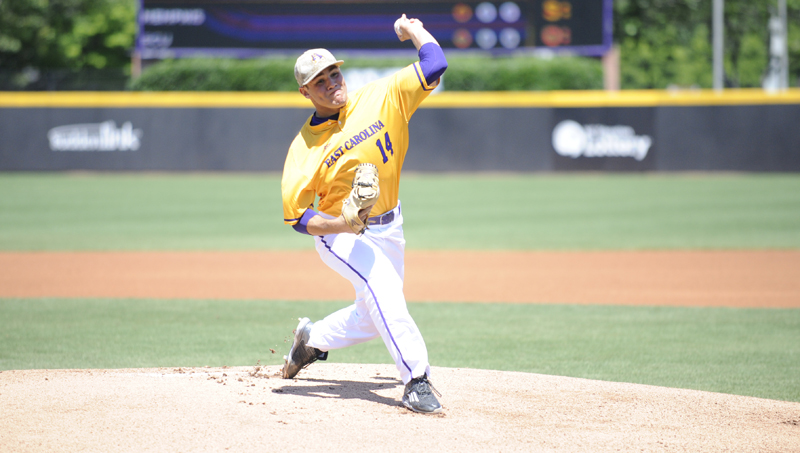 Sophomore Jake Agnos tosses to a batter during a game against Memphis last season.

GREENVILLE — Although East Carolina baseball coach Cliff Godwin tipped his hand a bit this week, there are still questions surrounding the Pirate pitching staff. The team is one week out from opening day against Western Carolina and there’s still a lot to figure out about the weekend rotation.

The Pirates lost left-handed pitchers Jacob Wolfe and Evan Kruczynski after the season to graduation. Kruczynski and Wolfe combined to throw nearly 107 innings in 2017.

ECU got to experiment with replacements for Kruczynski, the Friday-night ace, when he was lost to injury. The coaches used a committee approach in filling the void.

Trey Benton and Jake Agnos, both freshmen last year, were tossed into the mix. Godwin quickly found his freshman recruits were up to being thrown into the fire. Throughout Kruczynski’s injury, Godwin leaned on Benton and Agnos to lead the mound for the Pirates.

“Looking back (at) last year, it was kind of a lot, and it was uncomfortable, but it allowed us to get used to what to expect,” Agnos said. “I think coming forth this year you’re going to see a lot of guys step up and play the part.”

Last season, Benton went 3-4 in 14 appearances for ECU with a 4.18 earned-run average. He pitched 71 total innings, allowing less than one hit per inning (62), while holding opposing batters to just 33 earned runs (39 total). Although he gave up eight home runs off of those 39 hits, he struck out 74-of-302 batters he faced.

Also compiling three wins last season was Agnos, who finished 3-3 on the year. In 16 appearance for the Pirates, Agnos logged 64 1/3 total innings and less than a hit per inning. He gave up 10 less runs on the year than Benton (23), while striking out a similar amount of batters faced: 22.4 percent of the 285 he faced.

Benton and Agnos appear to be locks for the weekend rotation. The question is where they’ll slot in. Godwin said Monday that Agnos will start the third game of ECU’s season-opening series with Western Carolina, which leaves the Friday and Saturday slots open.

Juniors Matt Bridges and Sam Lanier have been in the fight since they were freshman. Both appeared in relief positions numerous times throughout the last two seasons. However, the ERAs of both pitchers increased a fair amount between their freshman and sophomore seasons. Bridges saw his hike from 2.98 to 4.82 and Lanier went from 4.15 to 5.17 during that same span.

While Godwin can trust his relievers to come in and retire a few batters here and there in parts of an inning every few games, they cannot be relied on to fill the Sunday role.

Other returners like Cam Colmore, Davis Kirkpatrick and West Covington will likely remain in the bullpen or will be used as mid-week starters.

That leaves junior Chris Holba and sophomore Tyler Smith as the two likely candidates competing for that final weekend spot.

Comparing Holba to Smith is a bit inaccurate stat-wise due to the lengthy time Holba missed due to a jaw injury that sidelined him for a good part of last season. However, Holba and Smith had nearly the same number of innings pitched. Holba’s ERA was lower, and he started four more games.

Holba contributed a 4-2 record in 14 appearances with 46 hits given up, but just 16 earned runs. While Smith gave up two less hits at 44, he allowed three more runs on the season (19) than Holba. Although Smith held opposing batters to a .265, compared to Holba’s .282, Holba earned 21 more strikeouts on his shortened year than Smith had throughout the entirety of the season.

With the ability to get batters out, a significant decrease in ERA in his first two seasons, more experience and twice the amount of strikeouts, Holba has earned a starting role on the mound for whichever day Godwin wants to play him. Even if Holba has to start a day other than Sunday, and Godwin shuffles around starters through the season, Holba has proven his name deserves to be on the card handed to the umpires at the beginning of one of the three weekend games.

“There’s a big difference between throwing the ball and pitching the ball,” Agnos said. “I don’t think anything is set in stone, I think it’s the competition of pushing one another.”