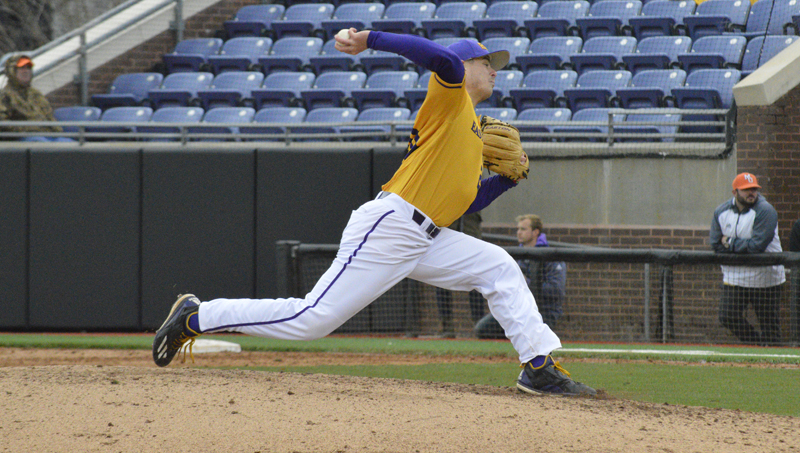 Tyler Smith throws to a batter during a game last season. Smith was one of many pitchers to thrive out of the bullpen.

GREENVILLE — East Carolina’s 9-3 win over Western Carolina on Sunday completed a sweeping start to the season. Offensively, the Pirates had hitting contributions from throughout the lineup. Defensively, they relied on lights-out pitching from their bullpen.

On Sunday, ECU had 11 hits and no errors in the field. The Catamounts acquired nine hits, but had four mistakes on defense.

“It’s a good feeling when we can put up a five in the first inning. That takes a lot of weight off my shoulders and makes my job a lot easier,” said starting pitcher Chris Holba.

Infielder Connor Litton hit a three-run shot, leading the Pirates to have five runs in the first for the second-straight game. Litton hung up one run, three hits, two putouts and a batting average of .556.

“I figured I just got to get the barrel to it and I’m strong enough that if I barrel it up, it’s going to go a ways,” Litton said.

Sophomore first basemen Spencer Brickhouse reached base safely with his walk in the first inning, lengthening the 19-game streak. He was seen at bat three times with one run, two walks, 11 putouts and two assists with a .333 batting average.

Holba, a junior, had a 61-pitch count until being taken out at the top of the fifth inning. He conceded four hits and fanned eight batters.

“I’m just really impressed with our pitching staff,” head coach Cliff Godwin said. “We have a lot of different options this year and a lot of depth on this team.”

Godwin put his bullpen to good use. Trey Benton took the ball to start on Friday. The combination of Davis Kirkpatrick, Alex Burleson and Sam Lanier gave up just one unearned run over four innings.

ECU carried the energy from the 8-3 season-opening win into a five-run first frame to begin Saturday’s contest. The run support allowed the Pirates to cruise to an 8-2 victory even after starting pitcher Chris Holba was tagged for two runs in three innings on the mound. Tyler Smith chipped in four innings out of the bullpen. He, Matt Bridges and West Covington combined for six scoreless innings.

“A great team win for us. The first weekend getting a sweep with a bunch of new guys, so it’s a good way to set the season,” Litton said. “Our coaches teach us that practices and scrimmages are the same thing as our games and I think that’s why we do so well during the games, it’s nothing different.”

The Pirates will travel to Buies Creek to play the Campbell Camels this Wednesday and then will host UNC at home Friday. The Tar Heels’ trip to Greenville marks the beginning of a weekend series — the first between the two teams — that will see them meet in Durham on Saturday before wrapping things up in Chapel Hill on Sunday.