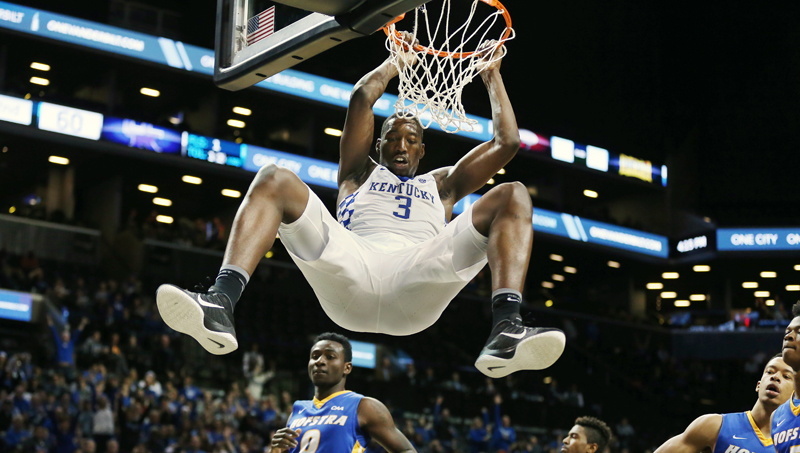 Bam Adebayo slams down a dunk during a game with Kentucky. (Chet White/UK Athletics)

New details of payments to players in a federal investigation that has lurked in the shadows since first rocking college basketball last fall mark the latest threat to the sport’s basic foundation, showing the breadth of alleged corruption.

Bank records and other expense reports that are part of the investigation list a wide range of impermissible payments from agents to at least two dozen players or their relatives, according to documents obtained by Yahoo Sports.

The depth of the violations raises questions about the structure of college athletics, a business funded primarily through college football and basketball, including $19.6 billion in TV money for the NCAA Tournament over the past 22 years — a hoops extravaganza for American sports fans known as March Madness.

NCAA President Mark Emmert said in a statement Friday the allegations “if true, point to systematic failures that must be fixed and fixed now if we want college sports in America.”

Yahoo said Friday that the documents obtained in discovery during the investigation link current players including Michigan State’s Miles Bridges, Duke’s Wendell Carter and Alabama’s Collin Sexton to potential benefits that would be violations of NCAA rules. According to the report, players over the past several years and family members allegedly received cash, entertainment and travel expenses from former NBA agent Andy Miller and his agency ASM Sports. Line items in four pages of documents released by Yahoo showed some five-figure payments and two dinners for less than $40 each.

Don Jackson, an Alabama-based attorney who has worked on numerous college eligibility cases, said the root of the problem for the NCAA is that its model of amateurism doesn’t work.

“This problem can be solved if players are compensated,” Jackson said. “The NCAA is not capable of adequately policing tens of thousands of athletes around the country to determine whether or not they have violated the NCAA’s model of amateurism.

“We’re talking about in some instances kids receiving $30 meals from agents,” Jackson said.

A balance sheet from December 2015 lists several payments under “Loan to Players,” including $43,500 to Dallas Mavericks guard Dennis Smith, who played one season at North Carolina State in 2016-17. Another document says Smith received a total of $73,500 in loans, and indicated options to recoup the money after Smith didn’t sign with ASM.

N.C. State athletic director Debbie Yow said the school disassociated itself from Miller in 2012, saying the agent’s close work with a youth coach created a vulnerability for the school “that we cannot tolerate.”

Isaiah Whitehead, a guard for the Brooklyn Nets, received $26,136 while a freshman at Seton Hall, according to the documents. He received $37,657 and was setting up a payment plan, according to another document. Whitehead signed with ASM but later left the agency. A balance sheet also said Tim Quarterman, now playing for the Agua Caliente Clippers of the NBA G League, received at least $16,000 while a junior at LSU.

The story says several families of players or handlers received more than $1,000 in payments from ASM Sports before turning professional.

The story says the mother of Bridges received hundreds of dollars in advances. Current Kentucky player Kevin Knox, Carter and Sexton are listed among players or families meeting or having meals with former ASM Sports associate Christian Dawkins.

Coaches and athletic officials at several schools, including Clemson, North Carolina State, South Carolina, Southern California and Utah, said they did not know of the alleged payments until Yahoo’s report was released, but pledged to cooperate in any investigation. Kentucky coach John Calipari said neither he nor his staff used Miller or any other agent to provide financial benefits to student athletes.

“Unethical agents have been an issue in college athletics — particularly men’s basketball and football — for many years despite repeated educational efforts by the schools,” Utah athletic director Chris Hill said. “Personally, I welcome the scrutiny on the sport of men’s basketball because the behavior of some agents, along with reports of other illegal recruiting activities, is hurting the sport. Coach (Larry) Krystkowiak has a great deal of integrity and runs a clean program, but this situation shows there are areas outside a coach’s control that need to be fixed.”

Tennessee coach Rick Barnes said he isn’t surprised by anything that happens in college hoops.

“We can sit here and talk about it for days on end if we wanted to, all the things that have gone on in college basketball,” Barnes said. “I’m not surprised by any of it.”

Lawyers for two of the 10 defendants arrested in the federal cases said it was inappropriate for Yahoo to have the documents.

“This leak is disgraceful,” said Jeffrey Lichtman, who represents former Southern California assistant basketball coach Tony Bland, who was fired last month after his arrest. Bland is accused of receiving a $13,000 bribe for steering the team’s players to an agent and financial adviser when they became professionals. Bland pleaded not guilty in November to charges related to bribery and wire fraud.

“An effort was clearly made to embarrass some defendants and cast aspersions on some current student athletes whose only ‘crime’ may be that their relatives didn’t reimburse an agent for a single steak dinner,” Lichtman said.

“In the most simple of legal terms; prove it,” Haney said in an email.

Jackson said the NCAA or the schools would need to conduct their own investigations as opposed to making any rulings based on the documents from the FBI probe.

“They can’t just automatically accept the credibility of this document,” the Alabama-based attorney said.

Emmert said the NCAA Board of Governors and recently formed independent Commission on College Basketball are committed to “making transformational changes” and will cooperate with the federal prosecutors to “identify and punish the unscrupulous parties seeking to exploit the system through criminal acts.”

Kentucky coach John Calipari says neither he nor his staff utilized Andy Miller or any other agent to provide financial benefits to student athletes, and the school says it will conduct an internal review and cooperate with authorities.

Current Wildcats freshman forward Kevin Knox and ex-players Nerlens Noel and Bam Adebayo are named in a Yahoo Sports report released Friday that says bank records and expense reports show a wide range of impermissible payments to players and their families from Miller and his agency.

Calipari said in a statement that he has “no relationship with Andy Miller or any of his associates” and will cooperate in the investigation.

University President Eli Capiluto says the school learned of the report Thursday night and “began immediately to conduct our due diligence” and will cooperate. Athletic director Mitch Barnhart added that Kentucky has not been contacted by the FBI or NCAA in the matter but has reached out to the governing body along with the Southeastern Conference.