Quick response by local fire departments may have prevented disaster at a neighborhood near Goose Creek State Park on Friday.

Emergency personnel responded shortly after 1:30 p.m. to calls of a fire threatening a number of structures located on Wren Drive, Hunters Glen and Camp Leach Road.

“With high winds and low humidity, the fire spread throughout the entire neighborhood,” Williams said.

While the fire scorched grass right up to the foundations of a number of homes and outbuildings, Williams confirmed that the fire did not harm any structures in the neighborhood. 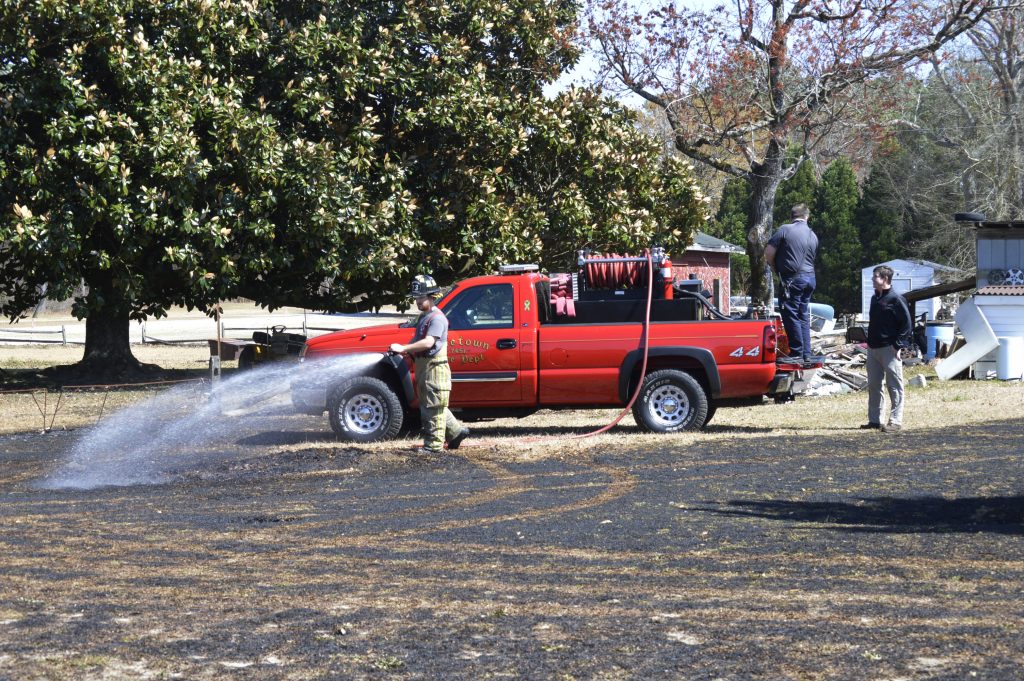 HOT SPOTS: Firefighters from the Pinetown Volunteer Fire Department hose down hot spots to prevent the fire from flaring back up. (Matt Debnam/Daily News)

“I thought that kid’s house was gone, I thought mine was gone but thank God the guys got here,” said Tim Stamatis, a neighborhood resident. “They did a great job. It was amazing response time. They deserve a lot more credit than they get.”

According to the National Weather Service, Beaufort County and much of eastern North Carolina was under an increased fire risk Friday due to high winds.

“When you see the red flag warnings, somebody’s going to burn in their yard and it’s going to blow like this,” Williams said. “It always does.”

According to the North Carolina Forest Service, Beaufort County is considered a “High Hazard” county in terms of fire danger. The NC Forest Service advises that the proper time to burn is on a calm day following a rain after grasses are green and hardwood leaves are mature.

While students across the country participated in walkouts protesting school violence on Wednesday morning, such mass walkouts did not materialize... read more