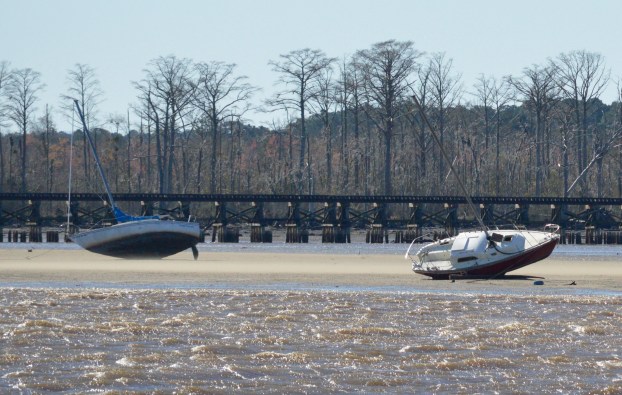 Looking out on the pristine waters of the Pamlico River, few things can detract from the area’s natural beauty like a sunken boat. On the waterfront in Washington, the problem of abandoned and derelict vessels is readily apparent.

Each day, visitors to the Washington waterfront docks and Havens Gardens see sunken and neglected vessels on the river. As it stands, no individual, organization or government agency is responsible for removing ADVs.

According to Washington waterfront docks Dockmaster Rick Brass, these vessels each pose hazards to other boats, the environment and the scenic nature of the Pamlico River.

“Abandoned and derelicts have been a concern for a while,” Brass said. “People bring their boats down here and just park them. We get a disproportionate number of boats that have been neglected. If they are neglected for period of time, they become derelict, and they become a hazard to other boaters and to the people who have slips along the river.”

In some cases, boats that have been anchored on the south side of Castle Island have been there for months, if not years, due to the simple fact that anchoring on the river is free. Brass says these boats can drag anchor and threaten both boats in navigation and those in slips. On some occasions, he has seen them collide with the railroad trestle and the N.C. Highway 17 bridge.

With a recent nor’easter draining the Pamlico to its lowest levels since 1989, Brass says that the issue has been exacerbated, with some boats not coming back up after resting on the bottom of the river.

Brass says that the Washington Waterfront Advisory Committee, on which he and Washington Director of Planning and Development John Rodman both serve, is currently discussing any possible actions the City of Washington could take to address the issue.

“A logical first step is to do something about putting in some anchoring restrictions,” Brass said.

For those interested in the overall health of the Tar-Pamlico river, the issue of ADVs presents a variety of challenges. From fuel spills to debris shed during storms, sunken vessels can present a host of environmental challenges. Sound Rivers, the organization that works to guard the health of the Tar-Pamlico and the Neuse rivers encounters such vessels on a regular basis in the course of its work.

English added that Sound Rivers would be willing to work towards a solution with any state agencies, organizations or local government entities interested in addressing the problem.

Under the definitions in this section, an abandoned vessel is one which has been moored, anchored or otherwise located for more than 30 consecutive days in any 180-day period without permission of the dock owner, or a vessel that is in danger of sinking, has sunk, is resting on the bottom or is located such that it is a hazard to navigation or is an immediate danger to other vessels.

According to Beaufort County Manager Brian Alligood, there is currently no such ordinance on file for Beaufort County. At least three other coastal counties, including Dare, New Hanover and Brunswick counties have adopted ordinances to address the issue.

In Brunswick County, the most thorough of the three, an extensive ordinance lays out the definition of ADVs and a strict set of regulations to prevent vessels in that county’s waters from becoming abandoned or derelict. The ordinance empowers the county sheriff’s office to remove the vessel, place a lien on it and charge the owner for all costs associated with the removal. In the most extreme cases, boat owners can be charged with a class three misdemeanor and face combined criminal and civil penalties up to $200 per day.

While North Carolina legislation grants counties these powers, there is currently no state-wide abandoned and derelict vessel program, state-funded or otherwise. According to the NOAA Office of Response and Restoration, of the 14 states that form the Eastern Seaboard, Florida, South Carolina, Virginia, Maryland and Rhode Island each have state-wide programs for the removal of abandoned vessels. Of these programs, only three receive funding from their respective states. 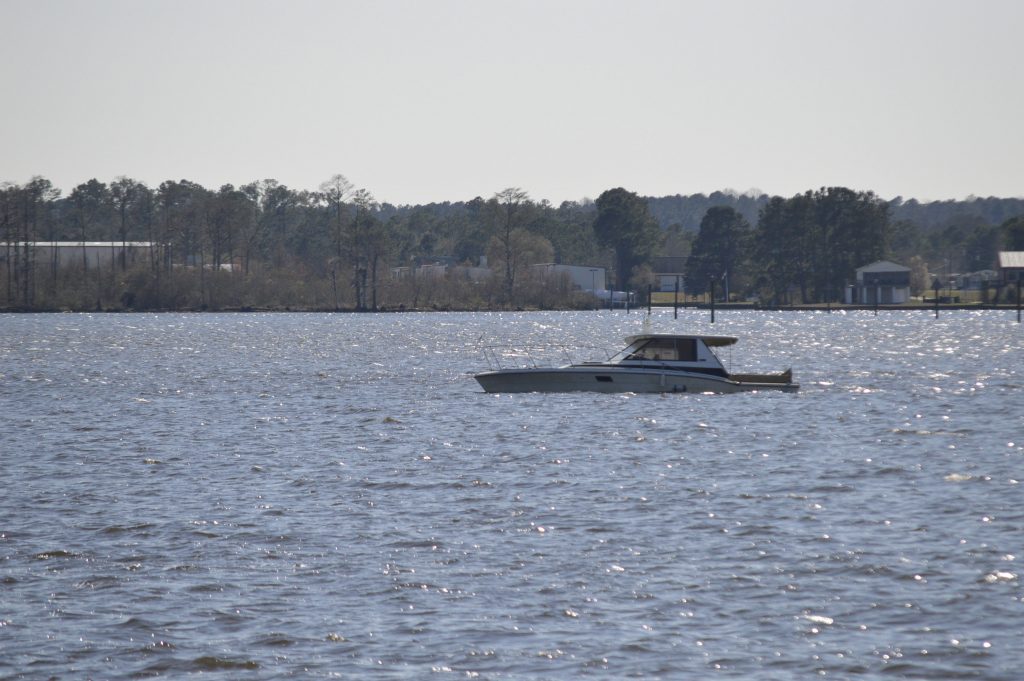 SUNK: This powerboat has been underwater at Havens Gardens since a nor’easter left it sitting aground earlier in March. (Matt Debnam/Daily News)

According to North Carolina’s littering laws governing the state’s navigable waters, it is illegal for any person, firm or corporation to leave a “scrapped vehicle or equipment” in any navigable waters of the state.

However, according to information provided by N.C. Division of Coastal Management Public Information officer Sarah Young, these laws do not apply to ADVs. Young went on to say that the only time the DCM would have a role in the removal of an ADV is if the vessel meets three criteria: It must be located in one of the 20 designated coastal counties, within an area of environmental concern and if it interferes in proposed activity or work (e.g., excavation, dredging, filling or alteration of coastal wetlands).

“DCM is not aware of any regulatory efforts in the works regarding derelict vessels at this time,” Young concluded.

According to North Carolina Wildlife Resources Commission Area Sargent Billy Cain III, the decision to prosecute vessel owners for littering would be at the discretion of the local District Attorney. Cain says he has spoken with local officials previously about the issue, and that currently there is no mechanism in place to remove such vessels.

“We try not to handle them,” Cain said. “Because once we do, they become our responsibility.”

To become owner of one of the Pamlico’s ADVs, all it takes is up to $155 in fees and extensive dealings with NCRWC. The NCRWC makes the rules regarding the procedures for taking ownership of abandoned vessels.

According to these guidelines, a person can become the registered and titled owner of an abandoned vessel by:

In most cases, however, the cost and effort involved in claiming a vessel, especially one that has sunk, far outweigh the potential benefits. According to Brass, raising and towing a sunken vessel can cost thousands of dollars and returns on scraping an ADV will generally only net hundreds.

With no state-wide program, no state funding and no organization or agencies currently championing the cause of vessel removal, the responsibility for regulating or removing ADVs in North Carolina currently falls at the feet of local governments or private citizens.

With limited money available for paving unpaved streets in Washington, the City Council is considering closing some of those streets... read more