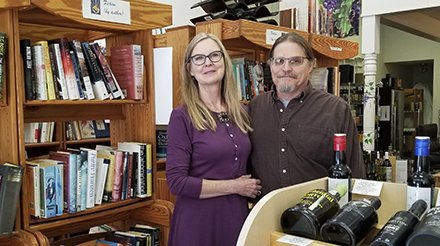 NEW OWNERS: Mary and Mark Mehlich, pictured here amidst their wines and words, took ownership of the shop on Main Street in January. (Matt Debnam/Daily News)

Nothing pairs quite so nicely with a good book like a glass of wine. At Wine and Words and Gourmet on West Main Street, connoisseurs of fine viniculture and the written word have been able to enjoy both of those passions for a number of years.

While the shop has become established over the years as a well-known and often-frequented shopping location, January saw a change in ownership for the store. After years of success under James and Yvonne McKelvey, former W&W wine consultant and manager Mary Mehlich, along with her husband and self-described “sidekick” Mark, took ownership of the store after the previous owners decided to retire.

“When the economy took a turn, they came back here and took over the shop as their livelihood,” Mehlich said. “In the interim, I went to work for a doctor, with the understanding that when they retired, I would like to buy the wine shop. James and Yvonne had been fabulous owners of the store. When they got ready to retire, they contacted Mark and I, and the process began.”

Prior to working as manager of the store from 2006 to 2012, Mehlich previously worked as a wine consultant and restaurant manager, giving her an extensive knowledge of wines. So far, that knowledge has helped her new endeavor thrive as she connects the wine-lovers of Washington with their favorite vintages from across the globe.

WINE SELECTION: Wines on the store’s $13 and under shelf offer world-class tastes that won’t break the bank. (Matt Debnam/Daily News)

“I carry domestic wines, as well as European, Greman, Austrian, South African, New Zealand, Austrailia — wines from all over the world,” Mehlich said.

To go along with these wines, the store also carries a wide array of accessories for the discerning sipper. For those without a taste for wine, the shop also keeps a rotating selection of craft beer in stock.

On the book side of the shop, Mehlich carries books from a wide variety of genres, offering something for readers of every taste. Mostly sourced from local authors’ publisher overruns, the store has good reads at competitive prices.

The third component that the store offers is a selection of gourmet foods that is both locally made and sourced internationally. Cheeses, olives, salamis and specialty items share space in the back of the store with local honey, sunflower oil and products from Petals and Produce.

GOURMET FOODS: Among the gourmet delights at Wine Words and Gourmet are cheeses sourced from around the world. (Matt Debnam/Daily News)

“Customer base is wonderful, we have about 1,500 people on our mailing list, and we’re on Facebook,” Mehlich said. “We’ve been well received. Washington is a wonderful little town that’s up and coming. The people here are fantastic. We hope to grow and meet the needs of what our customer base wants.”

For those interested in sampling some of Mehlich’s wares, the store holds free wine tastings from 4 p.m. until 7 p.m. Fridays and 1-5 p.m. on Saturdays. These tastings are a way for customers to get a taste of the store’s selection.

“The whole idea behind this whole thing is to try and become an integral part of the community,” Mehlich said. “We want to fill the needs of people who enjoy these kinds of things.���

Wine and Words and Gourmet will be one of the 14 local restaurants and businesses participating in the upcoming Taste the Good Life event on Thursday, sponsored by the Washington-Beaufort County Chamber of Commerce and the Washington Harbor District Alliance. Tickets for that event can be purchased at the chamber offices. The store will also hold a grand opening in conjunction with the chamber on a date to be announced.