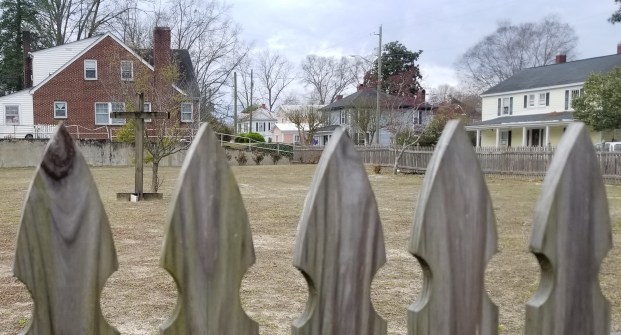 FUTURE GARDEN: Plans are in the works to develop this .38-acre plot on the coroner of East Second and North Academy streets into a thriving community garden. (Matt Debnam/Daily News)

On April 28, 2014, the unthinkable happened when fire claimed First Christian Church in Washington.

Nearly four years later, the .38 acres where one of the city’s oldest churches once stood is poised to see new life. Where the foundations of the church once rested, the soil will soon be teeming with growth, as church members work to establish a community garden at the site.

“The idea of these community gardens is to build community,” Deborah Ainsworth said. “We want to get the word out to the neighborhood or anyone that wants to drive in to work on a garden. We want to start off small to see how many people would be interested.”

The group is looking at a combination of tilled beds and raised beds, and is working with the Beaufort County Cooperative Extension Service to conduct soil surveys at the site to determine what kinds of additives might help their garden flourish. Once the work is underway, the group will welcome volunteers from throughout Washington.

“We want to be inclusive, but our walking area, Main, Second and Third streets are kind of what we’re targeting,” FCC member Chris Furlough said.

The group has also been taking notes from the Asbery United Methodist Church, working with the Rev. Jim Reed to learn more about what his congregants have been doing at that church.

For FCC member Miriam Roberson, who maintains a large garden of her own, the feeling of digging in the dirt and making something grow is special. She hopes to see a variety of plants in the garden, ranging from vegetables to flowers and herbs found in the Bible.

Moving forward at the site, the group hopes to make the area kid-friendly as well. With a tall fence surrounding, the area would be ideal to bring children to help work in the garden or even just to play. The children at FCC are already getting in the spirit of growing things, starting a small raised bed of their own on the church playground this spring.

Beyond those who participate, the group will be able to provide for more than just its members. Ainsworth says that extra produce will go to ministries such as Eagle’s Wings, and possibly be sold at the Farmer’s Market.

The group will hold a general interest meeting at 5:30 p.m. April 5. Members of the community, especially those within walking distance to the plot, are welcome to attend. 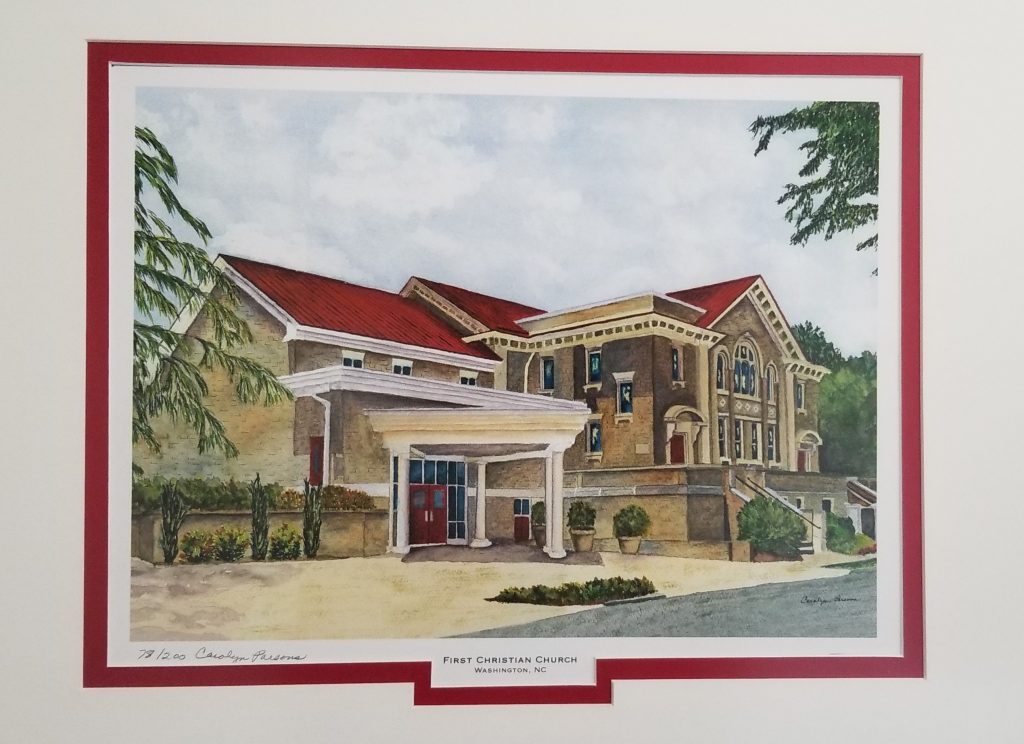 NEW LIFE: The planned community garden is slated to grow on the former site of the original First Christian Church, pictured here in art from Carolyn Parsons. The church was claimed by fire in April 2014. (Matt Debnam/Daily News)

The group at FCC is working in partnership with Bill Booth at Beaufort County Community College, who in turn is working with Healthy Places NC, an initiative of the Kate B. Reynolds Charitable Trust. For the past year, Booth has been working with neighborhoods throughout Washington to transform empty lots into community garden spaces.

“If I have individuals that are interested in gardening, I would help them develop the property,” Booth said.

According to Booth, approximately 30 lots were turned over to the city by the Federal Emergency Management Agency. Located in flood zones, these properties can’t be developed, making ideal spaces for community gardens. This in turn will save the city on maintaining these properties.

“It’s good for groups or individuals interested in gardening, because they have free land that they can utilize,” Booth said. “A couple individuals, a group or a church that are interested can contact me. We have a tractor we can use to till the soil and access to some seeds and fertilizer that was donated.”

Booth went on to say that training is also available at BCCC. While some courses cost money, others are completely free to the public. In addition to BCCC, the Beaufort County Cooperative Extension Service is an excellent resource for those just getting into gardening.

Of all the projects in the works, one in particular is exciting for Washington and Beaufort County as a whole. On March 30, beginning at 11 a.m., BCCC will host a grand opening of a new farmers market at 532 N. Market St. in Washington, complete with music, events and free food samples.

“In Washington and the county, there are a lot of individuals who need ways to subsidize their income,” Booth said. “We’re encouraging them to grow vegetables and then by providing a venue like the farmers market, it benefits the community and those that are growing. We’re excited about that.”

Individuals or groups interested in starting a community garden can reach Booth via email at Bill.Booth@BeaufortCCC.edu or by phone at 252-940-6280.

19 years ago, in January of 1999, Bishop Samuel Jones Jr. heard a voice. After learning about an unusual amount... read more