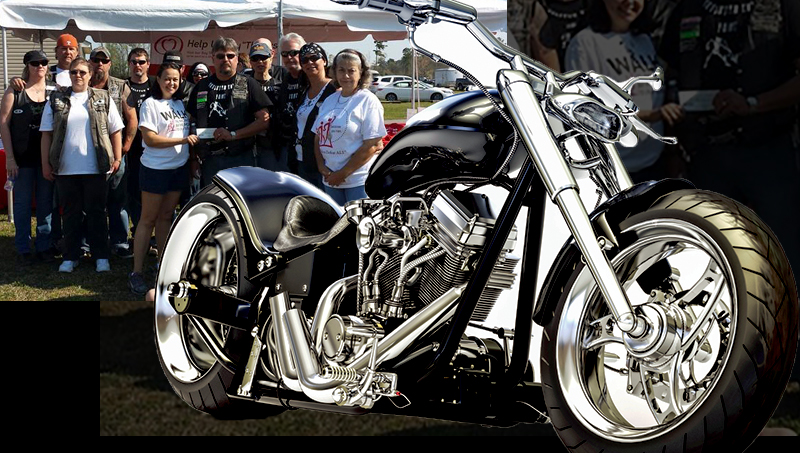 HEAD OUT ON THE HIGHWAY: Members of the Iron Order-Skeleton Krew relax after a fundraising ride. The clubs are known for the benefits they hold to raise money for good causes, such as tomorrow’s Chuck “Knucklehead” Garrett Benefit for ALS Research. Starting at noon with a ride and ending with the Eli Craig Band that night, all proceeds from the event will be donated to the family Down East Walk to Defeat ALS team. (Ira Screech Garrett)

Chuck Garrett was known as “Knucklehead” to his brothers in the Iron Order Motorcycle Club-Skeleton Krew branch, a club he’d help found before any other Iron Order club existed in the state. In 2013, “Knucklehead” succumbed to amyotrophic lateral sclerosis, a neurodegenerative disease commonly known as “Lou Gehrig’s Disease” that robs its victims of the ability to walk, speak and, eventually, breathe.

His Iron Order brothers have not forgotten him. Nor, has his actual brother, Ira “Screech” Garrett — every year for the past seven, they have held a fundraiser in “Knucklehead’s” name, the proceeds of which have been donated to ALS research.

“It’s $52,597. The first year kind of put it in perspective — the first year we donated maybe $50, but then we kinda got serious about it,” said Ira Garrett.

This year’s Chuck “Knucklehead” Garrett Benefit for ALS Research will be held tomorrow at American Legion Post No. 15, off of Market Street Extension in Washington. It starts with a memorial ride that leaves from the site at noon. Sixty miles later, club members and other attendees will be served up grilled chicken and fixins’ prepared by Brian “Winkie” Ward staring at 2 p.m., followed by music at 4 p.m.

“Every year he does the ‘Star Spangled Banner’ on guitar, just before the Eli Craig Band comes on. It’s kind of a tradition,” Ira Garrett said.

Throughout the night raffle prizes will be handed out, as well, he said.

Last year’s event raised $8,000 for the cause. Just as the “Star Spangled Banner” is an event tradition, another tradition follows: the proceeds from the benefit are donated before the Down East Walk to Defeat ALS to the team headed by Chuck “Knucklehead” Garrett’s daughter, Barbara Garrett Wilkins. Then many of the Krew head out on the walk themselves.

Teams tend to fade in and out of such walks, but the organizers of the annual walk in Greenville have commented on the Garretts’ and the Skeleton Krew’s staying power.

“They talked a lot about our longevity. We do it every year. We do it in remembrance of Chuck, who was my blood brother and my club brother,” Ira Garrett said.

While winter may be lingering on Saturday, Ira Garrett said he’s hoping for a good turnout again this year, so they can continue helping Wilkins’ team’s streak of being one of the biggest donors to the annual walk.

“I hope everybody will come out and enjoy some good food, good music and fellowship,” he said.