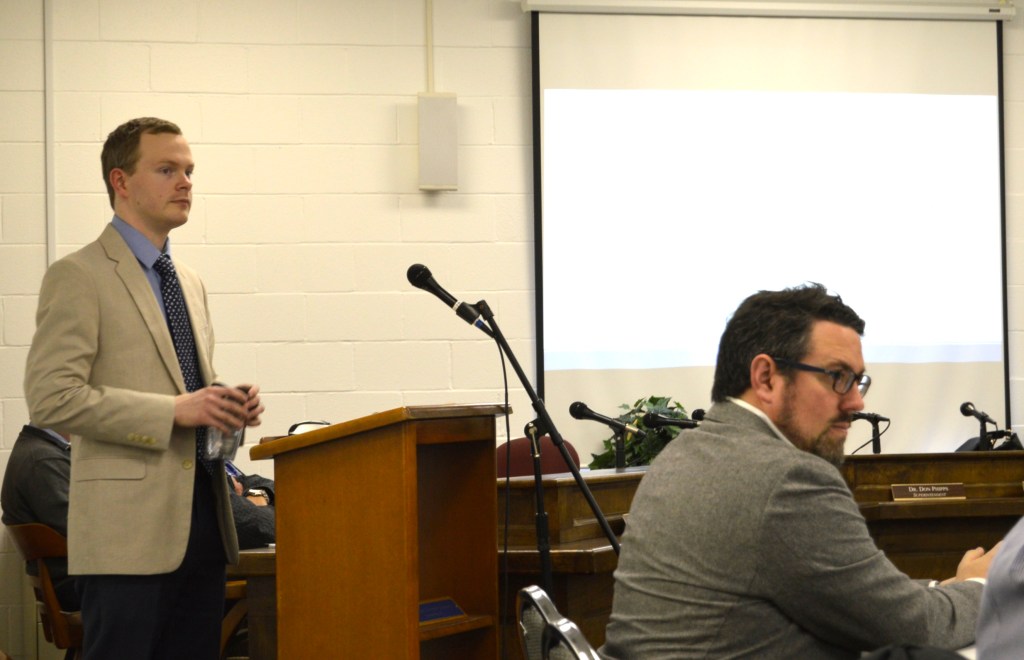 PLANNING FOR THE FUTURE: Thomas Dudley, of the N.C. State OREd, fields questions from county commissioners and board of education members during Friday’s joint meeting. (Matt Debnam/Daily News)

Throughout the state of North Carolina, long-range planning between boards of education and boards of commissioners can be a highly contentious issue. When the wellbeing of children intersects with taxpayer funding, emotions run high and the end result can be protracted and costly litigation.

The OREd, housed at N.C. State’s Institute for Transportation, Research and Education, is an office made up of educators, economists and public planners that specializes in examining the long-range needs of school systems throughout the state.

Two representatives of that office, Thomas Dudley and Mathew Palmer, made a pitch during the joint meeting concerning what they can offer Beaufort County.

“A school may take 5 years to plan for and build and cost $15 million dollars,” Palmer told the two boards. “Those are enormous public investments. Our charge at OREd is to integrate planning both from the school’s perspective as well as the county and municipal side, such that all efforts are pointed towards an efficient use of what limited public funds we have.”

In essence, the group could provide data and recommendations on school enrollment, land use, student assignments, transportation and future projections that would help the two boards see where Beaufort County might be five-to-10 years down the road. Such a study would create hard data that might help de-politicize the issue of school planning.

“There can be two different priorities at time, leading a county vs. leading a school district,” Palmer said. “We hope help to bridge that divide, to serve as a non-partisan, third-party research group.”

Utilizing student data provided by the school system, as well as live births in the county, the group could generate estimations of school capacity for the next ten years. This in turn can be used by the two boards to help shape policy and plan for possible capital needs.

According to Palmer and Dudley, the cost of the study could be completed by mid-summer at a cost of approximately $20,000. The first step in executing the study would involve looking at Beaufort County’s unique challenges and identifying a set of objectives for its school system.

Although neither board took action during the presentation, both were mostly receptive to the idea of the study. Speaking to BCS Superintendent Don Phipps and Beaufort County Manager Brian Alligood after the meeting, both spoke in favor of moving forward with the study.

“I think the fact that we’re doing it together, proactively, and that we’re hearing the same data allows us to work as partners and not as two groups that have to come together and find common ground,” Phipps said. “Hopefully we have some common ground when we get started.”

Alligood, who confirmed that the BOE and BOC have been in a legal battle before, sees the study as a way to ensure the two groups are on the same page as they make decisions.