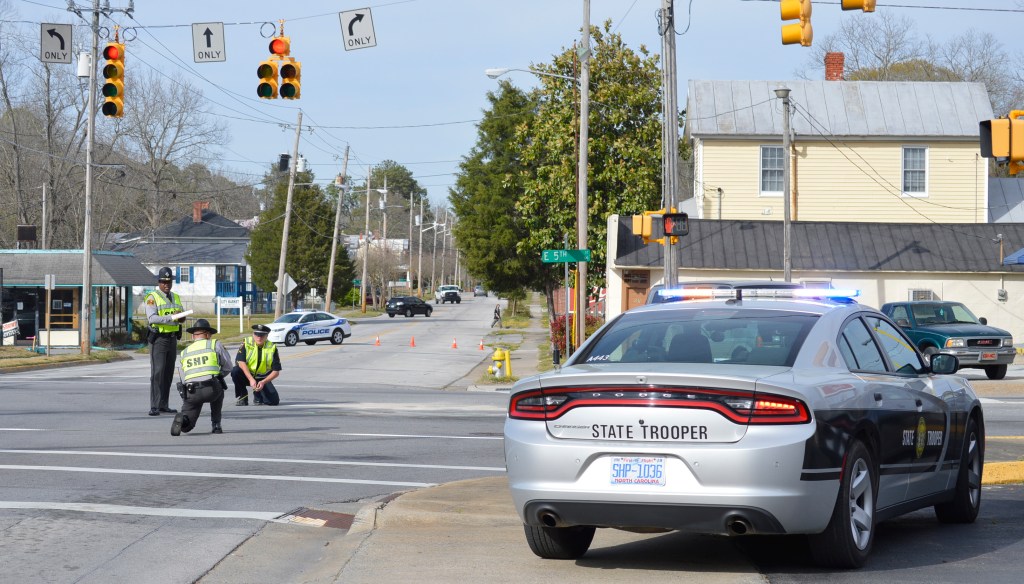 UNDER INVESTIGATION: Officers from the Washington Police Department and the North Carolina State Highway Patrol take measurements at the scene of a fatal accident on Thursday which involved a motorcycle and another motor vehicle. (Matt Debnam/Daily News)

A fatal accident closed down streets within a one-block radius of the intersection of North Market Street and Fifth Street on Thursday afternoon.

According to Washington Police and Fire Services Director Stacey Drakeford, the accident occurred at approximately 1:38 p.m. and involved a motorcycle and a motor vehicle.

Drakeford confirmed that the accident resulted in a fatality, but referred other questions regarding the death to the medical examiner. The names of those involved in the accident had not been released at time of print.

“We had an accident this afternoon at the corner of Market and Fifth Street and it involved a motorcycle and a motor vehicle,” Drakeford said. “The rider of the motorcycle was transported to (the) Greenville hospital.”

While the driver of the motor vehicle was transported to Vidant Beaufort Hospital for examination, Drakeford said that she had no obvious signs of injury. Drakeford said that although there have not yet been any charges filed as a result of the accident, the incident is still under investigation.

“Drivers of any motor vehicle need to be aware of their surroundings and be on the lookout for other vehicles,” Drakeford said.

A pair of eyewitness who saw the accident from a business near the intersection said that the motorcyclist went airborne as a result of the crash.

“We heard a crash and I looked around and he was just up in the air,” one witness said. “He went all the way from (the Duck Thru) to the Market Street sign.”