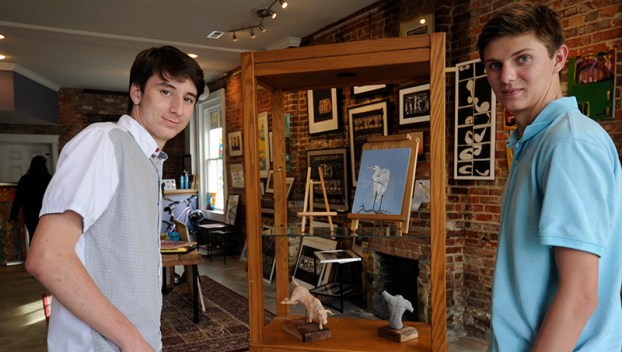 ARTS-RAISING: Nic Correa (left) and Mason Smigel (right) are pictured with students’ work that will be up for auction tonight at Contemporary Art Exchange in downtown Washington. On the shelf behind the two Washington Montessori Public Charter School juniors are two sculptures by Smigel and a painting by sophomore Samantha Knox. (Vail Stewart Rumley/Daily News)

Students at Washington Montessori Public Charter School are headed to auction — an auction of their own artwork as a fundraiser for an end-of-year trip.

The auction takes place tonight, from 6 p.m. until 9 p.m., at Contemporary Art Exchange in downtown Washington.

About a dozen students decided to host the auction as one of several fundraisers adding to the coffers of an end-of-year trip to Savannah, Georgia, according to their advisor, Daniel Gregory, who teaches social studies and history at the school.

“They came up with the whole idea themselves. I just sit in and be of as much assistance as I can be, but they do it themselves,” Gregory said.

Nic Correa, a junior, took on organizing and advertising of the auction for the group, while others, such as Mason Smigel, created artwork to donate under art teacher Pat Boyd and photography teacher Meredith Loughlin.

Correa said students weren’t hesitant at all about donating work to the show, but they did express reservations about work being auctioned.

“It was more like nerves that it wouldn’t sell, and they didn’t want to be embarrassed,” Correa said. 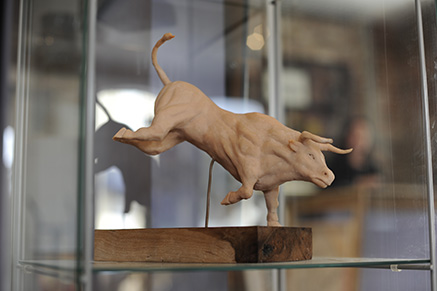 IN THE DETAILS: Mason Smigel’s detailed clay sculpture of a bull is one item on the auction list at Contemporary Art Exchange.

“Even adults — nobody wants to meet silence when their piece is on the (auction) block,” Jandrow said.

Organizers settled for a happy medium: a silent auction, augmented by a dessert sale with homemade desserts, also made by the students. Artwork up for auction includes students’ paintings, photography and sculpture, along with a few pieces donated by outside artists for the event.

Though he has a preference for digital sculpture using effect, Smigel chose to submit his more traditional artwork for the auction.

“This is just a good way to get the traditional stuff out there,” Smigel said, whose detailed clay sculptures of a bull and a torso, reminiscent of the decayed remains of sculptures of Greek gods, are slated for auction tonight.

For Smigel, the end-of-year trip to Savannah has a dual purpose: he and several others will be visiting the Savannah College of Art and Design while there.

Board wants more information about proposed sand mine

Washington’s Planning Board wants more information before acting on a request to amend the city’s zoning ordinances to allow mining... read more