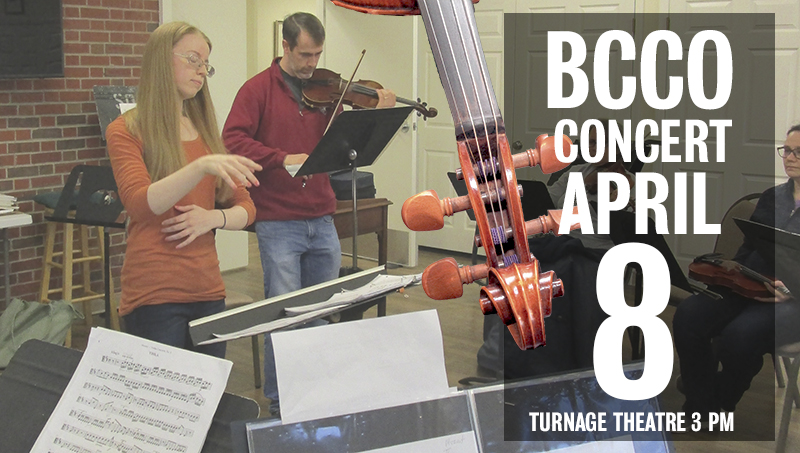 The Turnage Theatre will be alight with the sound of music on Sunday.

At 3 p.m. Sunday, Arts of the Pamlico will welcome listeners to the Beaufort County Community Orchestra’s spring concert at the theater.

The all-volunteer orchestra, along with Suzuki violinists, perform twice a year. Their ranks are made up of lifelong players, as well as those who’ve more recently dedicated themselves to learning an instrument, from trumpet to flute, violin to viola, and everything between.

This year, BCCO welcomes a new addition to its ranks: Allison Vanderslice, the music teacher at John Small Elementary School. She comes to the orchestra by way of a music education degree from Mansfield University in Pennsylvania, and also directs the school’s audition-based chorus, according to Ellen Ratcliffe, BCCO’s communications volunteer.

“To us, she is such an asset to the people of Beaufort County,” Ratcliffe said.

Vanderslice will also serve as guest conductor during a performance of Mozart’s Violin Concerto No. 3, in which BCCO conductor Chris Ellis will solo on violin.

The concert includes pieces from a variety of genres, including Handel’s Hallelujah Chorus from Messiah, as well the more contemporary work of Klaus Baldelt, as heard in the movie “Pirates of the Caribbean.”

“We’re trying to make everyone happy, and in doing so, have something for everyone,” Ratcliffe said.

Something for everyone also encompasses a performance by the most recent generation of performers: children studying violin via Suzuki method.

“Those are the ones of the future,” Ratcliffe said. “These little people will be playing their hearts out. It’s always fun to watch.”

Beaufort County Community Orchestra welcomes players young and old, those new to their instruments or brushing up on past musical skills. Sunday’s concert is free and open to the public.

The Turnage Theatre is located at 150 W. Main St., Washington.