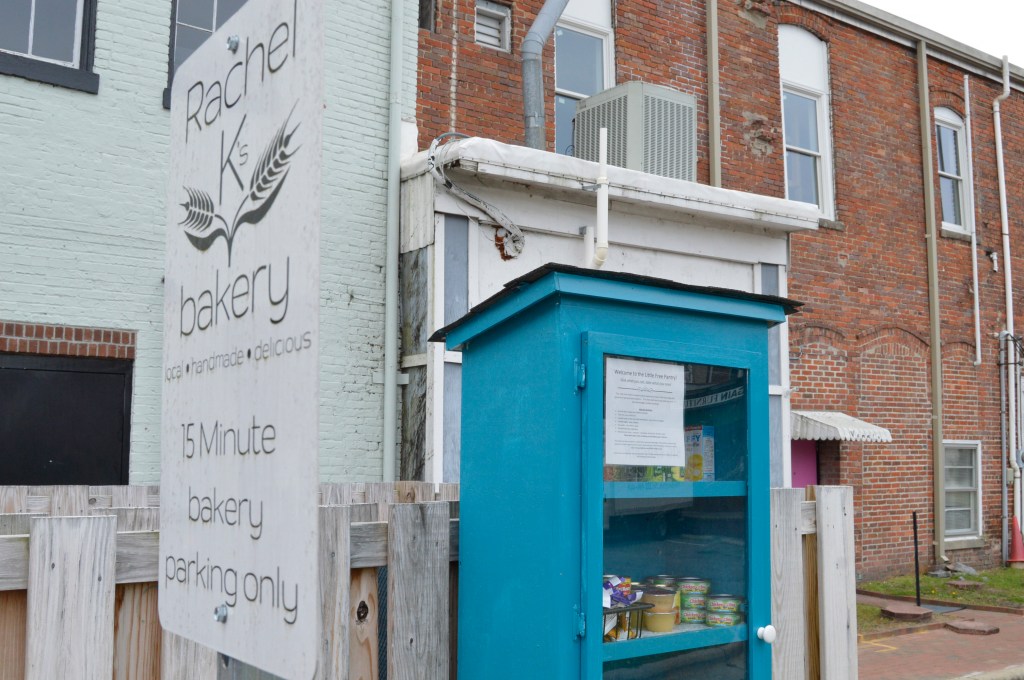 GIVE AND TAKE FREELY: This little free pantry, located behind Rachel K’s Bakery, is open to those in need and those wishing to donate. (Matt Debnam/Daily News)

According to 2015 data collected by feedingamerica.org, approximately 8,150 individuals were considered food insecure in Beaufort County, or approximately 17 percent of the county’s population.

While these statistics are troubling, one local business is taking a small step to address food insecurity in Washington and the surrounding area. This week, Rachel K’s Bakery unveiled a new free pantry behind the restaurant, stocked with non-perishable foods that might help supplement a food-insecure family’s diet. After seeing a post about a similar project on social media, bakery owner Rachel Midgette said she was inspired to create something similar in Washington.

“I thought it was a really neat idea, something fairly simple to execute and something that was probably needed in the area,” Midgette said.

After putting the call out for volunteers to build the box on social media, a customer came into her store and offered to build the pantry. A few days later, the box was constructed and mounted behind the bakery.

Within days, the pantry was stocked with non-perishable food items, as well as personal care and hygiene items.

“I know that there are local groups that pack lunches for kids to take home on Fridays so they’ll be able to eat over the weekend,” Midgette said. “A lot of us have no idea that that is a reality for a lot of people.”

For those who have enough, donations can be made at the pantry any time of day. Ideas for donations include:

Monetary donations will also be accepted at the restaurant to help keep the box stocked with food.

“Everybody has a couple extra cans of food in their pantry or can pick up a buy one get one free while they’re at the grocery store,” Midgette said. “It’s not going to solve the problem, but I feel like if we chip away at it in a few areas, we can help somebody go to bed with a full stomach that night.”

The Little Free Pantry Project is a nationwide movement that began in 2016 as a way to raise awareness of and prompt action to reduce food insecurity. For more information on the Little Free Pantry project, or to get plans to build one of your own, click to www.littlefreepantry.org.