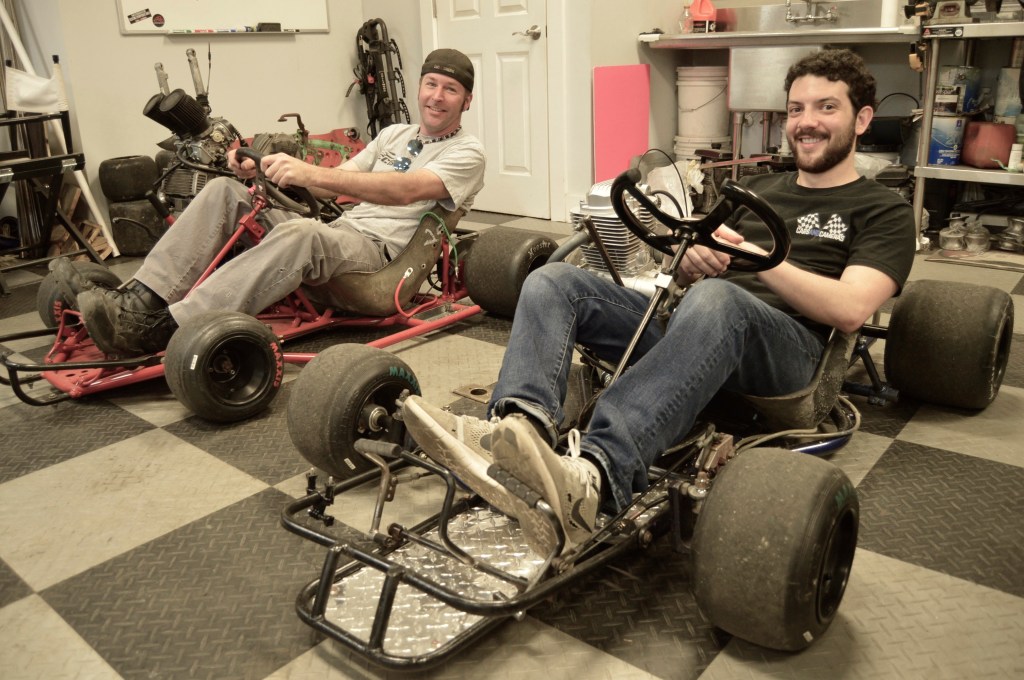 Tucked away in a tranquil corner of the Macswoods neighborhood, a simple, unassuming garage is home to a very successful small business.

With little in the way of inventory or overhead, and very few salaries to pay, this is not what one would call a traditional business. This little three-door garage is home to Cars and Cameras, a popular YouTube channel specializing in one thing: videos of go-karts, mini bikes and other fun toys doing really cool things.

For John Inzerillo and Isaac Jennette, this enjoyable venture started with an old BMW pickup truck. While Inzerillo was still in high school, Jennette was a mechanic at East Carolina Imports and the two spend many hours trying to get the machine to run.

First bonding over their mutual interests in the old pickup truck and go-karts, during the past six years, the duo has developed these interests into a profitable online venture. While Inzerillo has managed the channel’s video production and business model, Jennette has been the mechanical mastermind behind some of the channel’s more outrageous creations.

As to the channel’s origins, when he was a student at The Oakwood School in Greenville, Inzerillo worked, as many teenagers do, a minimum-wage job. In his case, this job was to take on the role of one of Santa’s elves at the Greenville Mall.

“I was like ‘I’m never doing this again,’” Inzerillo said. “I was thinking of outside-the-box ways I could make just a little high school money for myself. I had a friend who introduced me to the idea that creators can make money on YouTube.”

For Inzerillo, this seemed a perfect opportunity to combine his passion for cars with a nice income flow. The only problem was, in his words, “Everyone else was already making videos about cars, and who’s going to listen to a 17-year-old?”

While his early videos got some hits here and there, the channel really took off after finding its niche in go-karts. A major turning point for the channel came in August 2014 with the publication of a video entitled, “9 reasons to buy an old go-kart!” Since its publication, the video has garnered more than 2.9 million views. With that clip’s popularity, Inzerillo instantly saw his YouTube revenue jump from $3 per day to $14 per day.

So, how do those views equal money?

YouTube, which is owned by Google, utilizes a program called AdSense to place advertisements (typically lasting a minute or less) at the beginning of videos. The more these advertisements are viewed, the more content creators like Inzerillo and Jennette get paid.

Founded in November of 2012, Cars and Cameras has produced 304 videos over the course of the past six years. Today, the channel boasts more than 421,000 subscribers, and its content has been viewed more than 66 million times. A company in Texas, GoPowerSports, sponsors the channel, providing all the parts they need for their tricked-out vehicles.

The channel’s most recent creation can be described as nothing less than insane. Using his mechanical talents, Jennette has mounted a 70-horsepower, 900CC Ducati motorcycle engine to the body of a go-kart, allowing the machine to achieve speeds of 102 miles per hour. Tested on a closed course at the Kinston Drag Strip, this mechanical monster will be featured on the Velocity Channel at 9:30 p.m. on April 20, as a part of the TV channel’s “100 miles per hour for $1000 or less” challenge.

“We got up to 102 miles per hour when I came out of it. It had more in it, but I didn’t,” Jennette said of testing the machine. “We achieved our goal and that was enough.”

For those interested in entering the world of online video production, the pair offer three pieces of solid advice: find a niche, upload regularly and call on viewers to like, subscribe and share your page.

“It’s a lot of experimentation,” Inzerillo said. “I graduated college last year, and this is what I do full time to support myself.”

The majority of Cars and Cameras videos are shot on location in Washington, and new videos are uploaded twice per week. To view the full library of Inzerillo and Jennette’s videos, visit www.youtube.com/user/CarsandCameras. To learn more about the business, visit www.cars-cameras.com.