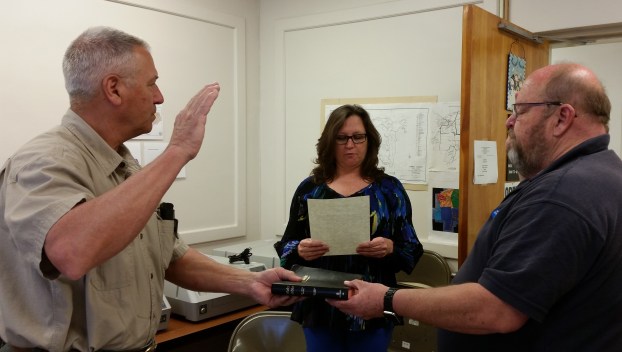 CECIL LILLEY AND BUDDY SWAIN (right) took the oath as members of the Tyrrell County Board of Elections on April 2. Angie Sexton (center), clerk of court, administered the oath. Deborah Huth was sworn in by an official in Hawaii and attended the 11 AM (5 AM Hawaii time) organizational session by telephone. Inetta L. Knight was sworn in later in the day. (contributed photo)

The newly appointed four-member Tyrrell County Board of Elections took office at 11 AM April 2, succeeding the three-member board that existed for decades.

The board elected Lilley as chairman, Swain as vice chairman, and Huth as secretary.

The Bipartisan State Board of Elections & Ethics Enforcement on March 27 appointed four members – two Democrats and two Republicans – to each of the 100 county boards of elections. The names were chosen from lists provided by the state political parties, according to Patrick Gannon, state board public information officer. These county board members will serve until at least June 25, 2019, or until their successors are sworn in.

“We congratulate the 400 newly appointed county board members across the state and look forward to working with them to administer fair and accurate elections in 2018 and beyond,” said Kim Westbrook Strach, state board executive director.

The state board also unanimously recognized the North Carolina Green Party as an official political party in the state.

Recognition means voters now have another choice of party affiliation when registering to vote.

Voters may register with the Democratic, Green, Libertarian or Republican parties, or they can register as unaffiliated.

It also means that Green Party candidates, chosen by convention in 2018, will appear on ballots in this year’s Nov. 6 general election.

The N.C. Green Party applied to the state board in December after a new state law allowed political parties with a candidate on the ballot in at least 70 percent of the states in the last presidential election to seek recognition. The Green Party’s nominee for president in 2016, Jill Stein, was on ballots in 38 states.

The number one professional development need in schools in the northeastern counties “is support for how to handle the range... read more