The Panthers grab early lead to coast to win 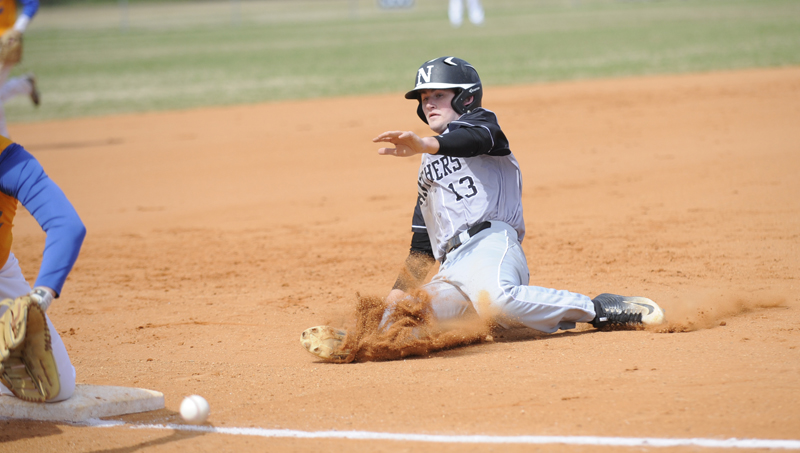 SLIDING IN: Northside’s Tanner Alligood slides under a potential tag and into third base against Columbia earlier this season. (Michael Prunka|Daily News)

The Northside baseball team cruised to victory Monday night at home, taking advantage of dominant performances on the mound and at the plate to defeat Mattamuskeet 14-0.

Starting pitcher Tanner Alligood set the tone for the Panthers. The senior pitched five innings, surrendering only one hit and one walk. Third baseman Landon Ormond was one of the key contributors at the plate, going 2-for-3 with a double and three RBI.

Northside wasted no time in taking control of the game and scored twice in the game’s opening inning. Shortstop Reg Bishop, who went 2-for-4 with a double and two runs scored on the night, led off the bottom of the first with a double. First baseman Zach Griffin eventually brought Bishop home with a two-run home run to open the game’s scoring.

The Panthers continued on to score six runs in the fourth inning and another half-dozen in the sixth inning. Catcher Matthew Marslender chipped in offensively with an RBI and a double on 2-for-3 hitting at the plate.

Northside (11-5), currently sit second in the Coastal Plains 1A Conference behind Riverside, thanks to a 5-2 conference record. The Panthers will next hit the road to play the Chargers of Ayden-Grifton on Thursday at 6:30 p.m.

The ECU baseball team lost its first series of…