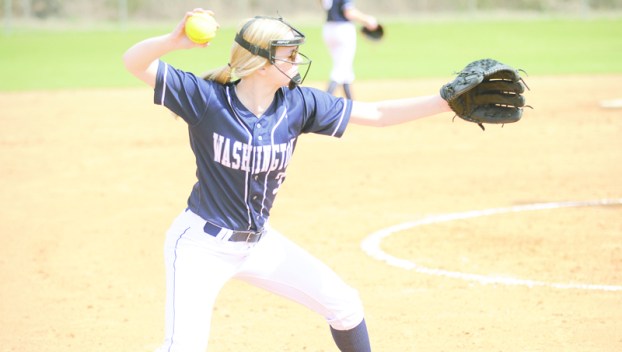 EASY WIN: Washington’s Emme Davis makes a throw from third earlier in the season. Davis had one hit as Washington breezed to a 21-0 win at North Lenoir Tuesday. (Michael Prunka|Daily News)

Roundup: Pam Pack and Unity both dominate in wins

Pam Pack pours it on against North Lenoir

LAGRANGE—The Washington softball team used an explosive first inning to put Tuesday night’s game against North Lenoir out of reach and coasted to a 21-0 victory.

It didn’t make much of a difference when North Lenoir came up to the plate, as Washington’s Abbigail Tucker, a sophomore, and Summer Campbell, a junior, combined to limit the Hawks to two hits. Tucker pitched the game’s first three innings, striking out six Hawks. Campbell closed out the final two innings, racking up three strikeouts and issuing one walk.

After trailing Wayne Christian (3-6) entering the sixth inning in their previous matchup, the Warriors (10-0) wasted no time in building a lead. Sophomore Grace Bumpass led off the bottom of the first with a home run.

Juniors Gloria Valdez and Macy Main added to Unity’s lead in the second, with each knocking in a run with a base hit. Kaley Coltrain capped the scoring in the second with a three-run home run to push the Warriors’ lead to 6-0.

Unity’s offense was led by Main, who racked up four hits. Bumpass and Valdez chipped in with two hits apiece. Main, also starting pitcher for Warriors, pitched a complete game to improve her record to 7-0.

A perfect storm of Unity’s bats smashing the ball, Wayne Christian’s pitching falling apart and defensive errors from the Hawks led to a 12-run inning for the Warriors in the fourth, effectively ending any hopes of a Wayne Christian comeback. But the Hawks still put up a fight and tallied two runs in the fifth inning.