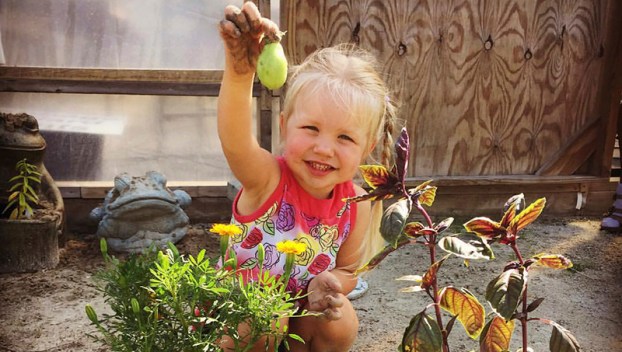 EARTH GIRL: Mira Loughlin shows off a tomato at the Loughlins’ Macswoods home in Washington. The family has made lifestyle changes that embrace environmental awareness. (Meredith Loughlin)

How one family is doing their part to help the environment

For some, the day passes just like any other; for others, it’s an opportunity to get outside and do something good for the environment. But for one Washington family, every day is Earth Day.

That’s how the Loughlin family lives — Meredith, Neil and 5-year-old Mira. Owners of Lone Leaf Gallery & Custom Framing in downtown Washington, from a distance, the Loughlins’ life is no different than that of any other young family, but on closer look, their lifestyle is about impacting the environment for good.

Meredith Loughlin has been literally trying to save the Earth since she was 8 years old, when she and a friend started the “Save the Earth Club.”

“We put up cardboard signs in our neighborhood about littering, caring for animals, et cetera, only to have them promptly torn down and ripped up by our little brothers. We didn’t understand why someone wouldn’t care about saving the Earth, but here we are today, having the same conversations,” Loughlin said.

She’s been mindful ever since, but it was after she got married that she began making permanent lifestyle changes aimed at doing no harm to the environment. An artist, she’s always identified as a science-buff. She began doing research.

“In my research, I learned about how plastic leaches cancer-causing chemicals into our food/water, so our first major change was to buy stainless steel water bottles. That was 10 years ago,” Loughlin said.

She said their decision to adopt a vegetarian diet was less about being animal lovers, though they are, and more about healthy eating and environmental impact.

“The environmental impact of industrial meat farming is staggering. It pollutes the air with carbon monoxide; it pollutes our waterways with high levels of nitrogen, which in turn leads to algae blooms, and in turn, massive fish kills. The list goes on and on,” Loughlin said.

The decision to go green has touched every aspect of their lives, from laundry — the Loughlins adhere to a “more than one wear” rule and dry their clothes on a line — to brushing teeth — she makes her own toothpaste to avoid buying the non-recyclable tubes mass produced toothpaste comes in.

“My 5-year-old loves it and won’t use anything else,” Loughlin said.

Any single-use plastic container is passed over in favor of packaging that’s more easily recyclable or biodegradable. An investment in Tupperware was the solution to food storage, and they no longer buy Ziploc bags or cling wrap.

Plastic grocery bags are also not an option for Loughlin; she brings her reusable bags with her to shop instead. Since a family focus is on unpacked foods like fruits and vegetables, all the leftovers are composted to make naturally nutrient-rich dirt for their garden and yard where they grow flowers, herbs, lettuces, tomatoes and more. They have a rainwater barrel set up under a patio downspout — the water collected is used for watering the plants.

That’s at home, but the effort to be green extends outside the home, as well. Loughlin drives a hybrid Toyota Highlander, though she would prefer to ride her bicycle more.

It’s a continuing effort that has the family buying used goods when they can — books, toys, art supplies, clothing — and when buying new, making sure the packaging and the product will do as little damage to the environment as possible.

“My daughter and I used to go out and pick up buckets of trash, at parks, along the river, along the road. Almost all of it was food wrappers, utensils, straws, drink tops and bottles. I don’t use any of these items anymore, and it opened my eyes to how people’s daily consumption can leave a major environmental impact,” she said.

Loughlin does not preach the green lifestyle; she views it as a personal decision, one that she and her family have adopted in an effort to do their part to be responsible citizens of the Earth.

“There are so many ways we could be even more eco-friendly, or green, but I would say we are living a pretty standard American life making mindful decisions and creating positive habits as we go,” Loughlin said.