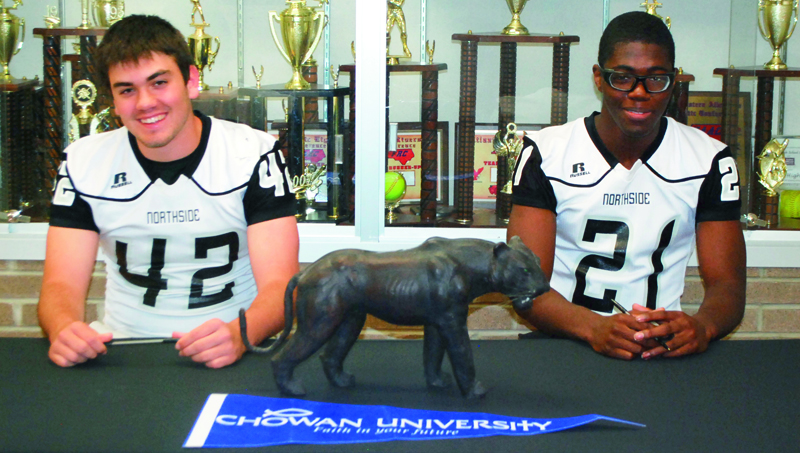 PINETOWN—Two Northside football players will continue their football careers together at the next level this upcoming season, as Parker Boyd and Ray Freeman signed to play for Chowan University yesterday.

Having the opportunity to play at the collegiate level with a high school teammate is something both young men described as “awesome”.

“It’s an honor,” Boyd, a tight end, said. “Especially with [Freeman], he’s such a hard worker. To be on the same level as him is a great honor for me.”

The teammates both said they chose Chowan for the fact the school provides a quality education and a good football program. 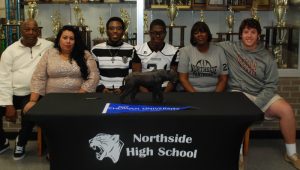 The humble Freeman, who played on the defensive line during his time as a Panther, was quick to credit others for getting the opportunity to play football at the Division II school.

“It just shows how good the coaching staff was these fours years as they pushed me to get here,” Freeman said. “I just want to thank them.”

Head football coach Keith Boyd, Parker’s father, said he is proud of his two players going off to play at Chowan, not just because they’re moving on, but because of the hard work they put in to get there. 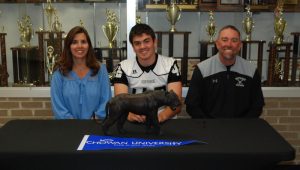 PROUD PARENTS: Northside’s Parker Boyd (center) poses for a photo with his parents on the day he signed to play football at Chowan University. (Sean Finnerty|Daily News)

As a father, the elder Boyd is excited for his son as he goes off to college.

“I’m tickled for him,” coach Boyd said. “He gets an opportunity to do something he’ll never forget. You go try it and if you succeed that’s great and if you don’t, you can always look back and say ‘hey I gave it a shot.’ It’s kind of growing up, becoming a man and making his own decisions.”

Freeman’s mother, Belinda Freeman Wilkinson, said she was very proud of her son. Similarly to her son, she credited his support system of family and coaches for helping him get this opportunity.

As they finish up their time at Northside, both Freeman and Boyd said this past season’s victory over rival Southside in the Anchor bowl was their proudest moment playing for the Panthers.