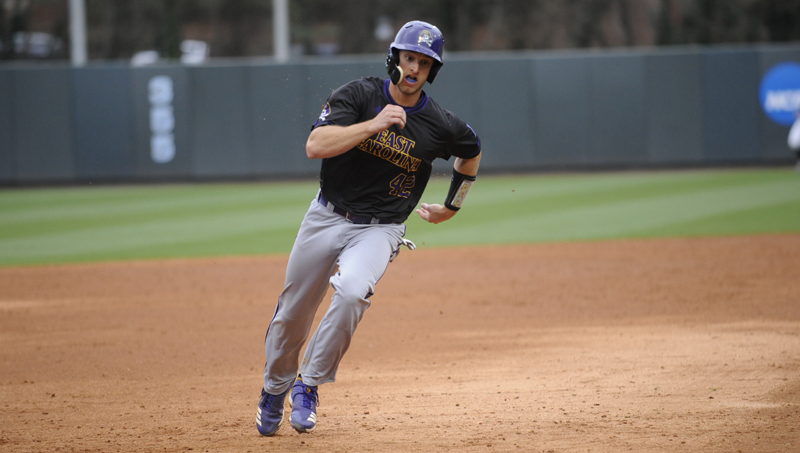 RUNNING HARD: ECU's Spencer Brickhouse runs the base path earlier in the season against UNC. Brickhouse had an RBI and scored two runs in the 16-7 win over UNCW last night. (Michael Prunka|Daily News)

MEMPHIS—East Carolina pitcher Chris Holba stayed perfect this season (9-0) as he went 7.1 innings last night in the Pirates’ series opening 5-1 win at the University of Memphis.

ECU hit the double-digit hit plateau again as it picked up ten hits while en-route to victory over the Tigers. While only eclipsing two more hits than Memphis, the Pirates scored in more two-out situations to distance themselves in the win.

Despite outhitting the Tigers, ECU head coach Cliff Godwin wasn’t satisfied with his team’s performance at the plate.

“Offensively I thought we were very average to be honest. We did enough to score some runs on getting big two-out RBI hits by [Jake] Washer and [Bryant] Packard along with Brady Lloyd’s aggressive base running that gave us a run,” Godwin said. “Just thought we were okay offensively with a lot of soft contact and don’t know if we were as focused as we needed to be, but we did enough to win.”

Designated hitter Spencer Brickhouse reached home plate first in the contest to begin the scoring during the top of the fourth inning, after he lead off the inning with a single up the middle. Washer, recently named to the 2018 Johnny Bench Award watch list as one of collegiate baseball’s top catchers, earned a walk as the second batter of the inning. That was followed by center fielder Andrew Henrickson’s walk two batters later. Memphis pitcher Alex Smith threw a wild pitch, which allowed the bases to advance and Brickhouse to score, giving ECU its 1-0 lead. The Pirates would fail to score any more runs in the inning, however.

Memphis saw a similar situation occur in the bottom of the fourth when right fielder Colton Neel, first baseman Kyle Ouellette and designated hitter Nick Vaage each hit two-out singles. Vaage advanced to second thanks to an ECU throwing error and all bases advanced, plating Neel to tie the game at one.

The Pirates pulled away in the next frame, when they once again used the middle innings to their benefit, like they did against Duke just a few days prior in the midweek clash.

After first baseman Alec Burleson grounded out to begin the top of fifth, left fielder Bryant Packard reached first on a fielder error by Ouellette and advanced to second on the next batter, thanks to Lloyd notching a single. With two outs, Washer singled to center, but ECU once again advanced to score on the play after a fielding error. Both Brickhouse and Lloyd crossed the plate, picking up two unearned runs to give the Pirates the lead at 3-1. A Litton single on the next at-bat scored the third and final unearned run of the inning.

Right fielder Dwanya Williams-Sutton, who was the Pirate’s top hitter in the game going 3-for-4, added an insurance run in the top of the eighth to put the game away. After leading off up the middle, he eventually stole second, and was sent home, thanks to a Packard single.

ECU will look to bring the 5-1 victory momentum into today’s doubleheader. First pitch for game one of the day, and game two of the series, is scheduled for 2 p.m. and the first pitch for the series finale will come approximately 45 minutes after the conclusion of the first game on the day.