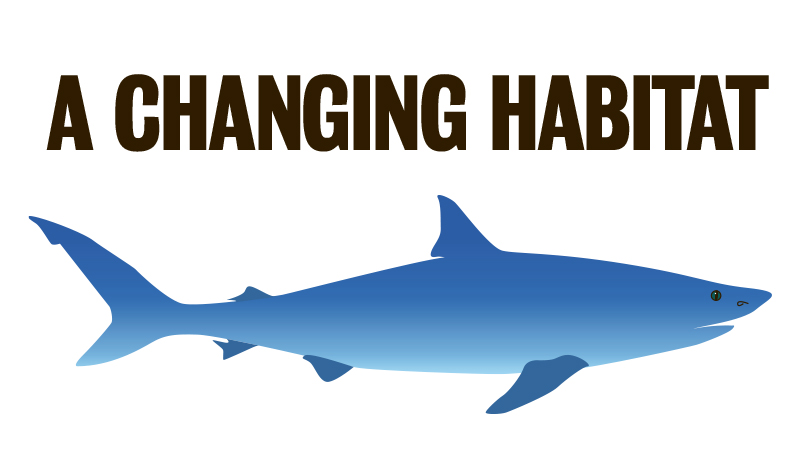 Since the blockbuster movie “Jaws” hit the big screen in 1975, the thought of what lurks beneath the water has impacted many swimmers. According to research released by a team of scientists from East Carolina University, North Carolina Division of Marine Fisheries and Simon Fraser University in British Columbia, it turns out there’s plenty, and the population of bull sharks in the Pamlico Sound, and the potentially the river, is growing.

Bull sharks reach up to 10 ½ feet in length; their prey is large. Their presence has been recorded in the Pamlico Sound for decades, but what’s changed is that their numbers are growing, leading researchers to believe that what was once a waterbody incompatible with breeding is now compatible because of climate change.

“What we see in Pamlico Sound appears to be a threshold response, where gradually increasing water temperatures crossed into ranges suitable for a Bull Shark nursery,” Dr. Charles Bangley wrote on his blog. Bangley is the lead author of the study, and a postdoctoral researcher at the Smithsonian Environmental Research Center and ECU. “The summertime conditions in the sound are becoming more similar to the temperature ranges we see in other estuaries where Bull Sharks are already known to give birth. As long as the temperatures stay within that range, juvenile Bull Sharks will likely be a regular presence in Pamlico Sound.”

Bull sharks’ known nurseries primarily have been found in the Gulf of Mexico and Florida, but with water temperature and salinity increases associated with climate change, the sharks are adapting to find better breeding grounds. Between 1965 and 2011, only nine bull sharks were documented in the Pamlico Sound; between 2011 and 2016, 64 were documented — all of them juvenile.

On the surface, a rising juvenile bull shark population in the Sound would appear to have little impact on the Pamlico River, but a unique feature of bull sharks is their ability to tolerate brackish and even fresh water. As sea level rises, brackish water penetrates farther inland into rivers, as does any species that can tolerate the part-salt, part-fresh water.

One local fishing guide said he’s personally never seen bull sharks in the Pamlico-Tar River, but he doesn’t doubt their presence. Richard Andrews, owner of Tar-Pam guide service, is on the water leading fishing expeditions nearly every day of the year. He said he’s personally only caught bull sharks in the Sound — juveniles at 3 to 4 feet long — but he’s heard tell of a sighting as far up the Tar-Pamlico as Rocky Mount; another, an encounter at U.S. Highway 17 bypass bridge in Washington.

“There’s very little doubt in my mind that they’re in the river,” Andrews said.

Bull sharks are an apex predator, meaning they are at the top of the food chain, and have been known to attack humans. However, the only documented shark attack in the Pamlico Sound happened in the 1990s, during one family’s sailing trip from Oriental to Ocracoke. Though the injuries were substantial, the victim survived the bull shark attack.

It remains unclear just what the study means for people — commercial fishermen, recreational swimmers and boaters — on the Pamlico River.

What is known is that the Sound is too cold in winter months to sustain the shark population. Bull sharks migrate elsewhere in the colder months, and researchers are now tagging juveniles in order to determine where they go.

“We just don’t know what this will mean for the ecosystem or for human-wildlife interactions in the region, but there is potential for disruptive effects, and we need to work together to plan for them,” said David Shiffman, co-author of the study and a postdoctoral research fellow at Simon Fraser University.

“I think one thing they’re saying is that there’s always been bull sharks in the Sound, but I think the big take-away is that this is one of many ways that climate change will impact North Carolina,” said Forrest English, Pamlico-Tar River riverkeeper.

English said it is that, rather than encounters with sharks in the river, that should be cause for concern.

“People should always try to give wildlife a wide berth and certainly keep an eye out, but of long-term concern is the effects of a changing climate, and, long-term, how we adapt to it,” he said.