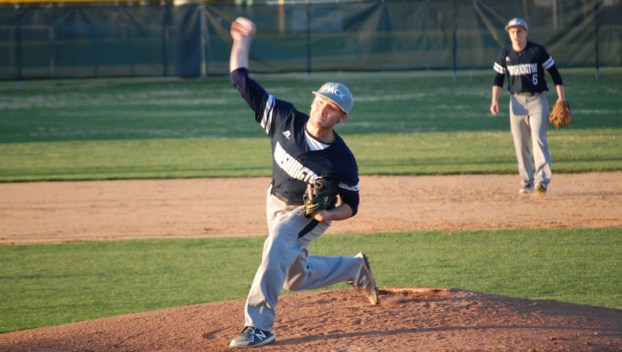 The Pam Pack is back in playoff contention with victory

AYDEN—Washington ended a three-game losing skid, while also taking a big step toward getting back into an automatic qualifying spot for postseason play, with a 7-1 road victory over Ayden-Grifton Friday night.

Possibly feeling the effects from its three-game losing streak, Washington (11-5, 5-4) took some time to warm up at the plate. Hitless through the first two innings, the Pam Pack finally got going in the third, jump started by Trippe Bonner’s double down the third baseline. A two-RBI single from Wilson Peed, immediately followed by Cooper Anderson’s RBI single gave Washington some breathing room at 3-0 and got the dugout rocking.

“We got the hits in the big times,” Washington coach Kevin Leggett said. “We had some two-RBI hits tonight, which is what we hadn’t been getting [during the losing streak]. We’ve been getting guys on base but we just hadn’t been able to get them in very much lately.”

The Pam Pack’s slow start at the plate can be attributed to the work of Ayden-Grifton’s (11-9, 2-6) starting pitcher, Austin Jones. Through the first two innings the right-hander didn’t allow any hits, while striking out four Washington batters. But once the Pam Pack got in a groove at the plate, Jones had difficulty getting outs and he wasn’t helped by some sloppy play from his defense. Jones lasted until the fifth inning with the score 7-1.

“He threw really well those first two innings and it built his confidence,” Ayden-Grifton coach Corey Skinner said. “Then a couple mistakes on a couple of pitches and get some base runners on, and I think that panic mode sets in a little bit. You start to press a little bit, try to pitch your way out of it and sometimes you have to trust your stuff. It kind of snowballed on him a little bit and lost some control on different things.”

While Jones couldn’t maintain the standard he set through the first two innings, Washington’s Chris Sulc was firing on all cylinders his whole time on the mound. The senior registered at least one strikeout every inning, either sending a Charger back to the dugout swinging or catching them looking. Sulc lasted six innings, surrendering two hits and striking out nine Ayden-Grifton batters.

Washington came into last night’s game in fifth place in the Eastern Carolina 2A Conference, and with its win, along with West Craven’s (14-4, 5-3) triumph over South Lenoir (9-7, 5-4), the Pam Pack finds itself tied with the Blue Devils for fourth place. Only the top four teams in the conference earn an automatic bid to the playoffs.

Washington hosts South Lenoir on Tuesday, with the winner taking sole position of either third or fourth place, depending on the result of Tuesday’s matchup between West Craven and Greene Central (10-7, 6-3). The Blue Devils defeated the Pam Pack 4-0 at home back in March.

Round Up: Pam Pack and Seahawks continue winning ways