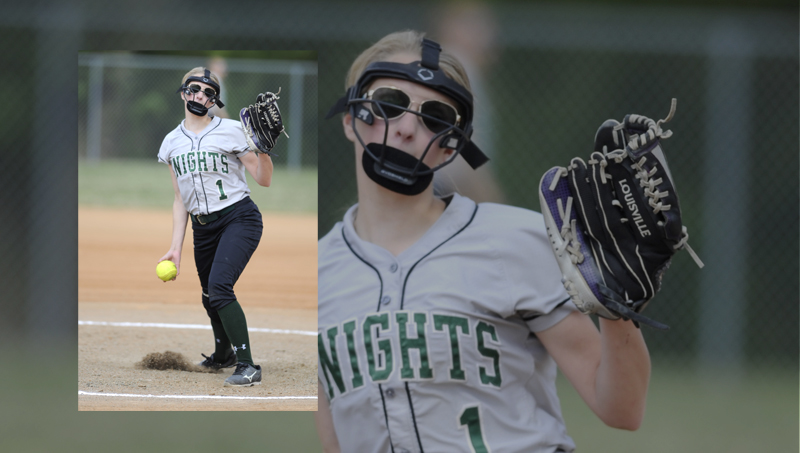 TOSSING IT IN: Terra Ceia’s Emily Roscoe fires in a pitch against Unity in their matchup last Thursday. (Ashley Vansant|Daily News)

The Unity Christian Academy softball team’s unbeaten run continues, as the Warriors defeated Terra Ceia 15-0 at home on Thursday and followed that by hitting the road to beat Wilson Christian Academy 9-7 on Friday.

Unity (12-0) honored its two seniors, Grace Rose and Kaley Coltrain, before Thursday’s game against Terra Ceia (0-9, 0-7). Presumably still fired up from the pregame festivities, the Warriors quickly built an insurmountable lead over Terra Ceia. Unity scored five runs in the first inning and followed it by scoring six more in the second.

Both Rose and Coltrain had strong games in what was their final home game in a Unity uniform. Rose went 2-for-3 at the plate, hitting two doubles, while knocking in two runs and scoring two runs herself. Coltrain also hit 2-for-3, including a double, and scored three runs.

Chloe Boyd pitched a five-inning complete game for the Warriors, as she improved her record to 4-0. Boyd struck out nine Kinghts without walking any.

Catherine Cutler began the inning with a bloop single and reached second when Wilson committed an error trying to field a Grace Bumpass hit. Coltrain followed with a two-RBI double, bringing home Cutler and Bumpass. Rose then scored Coltrain with a two-out single, tying the game at 5-5.

Showing its mettle, Wilson responded by retaking the lead, 6-5, in the bottom of the fifth. But the Warriors answered right back and took the lead for good in the sixth.

Unity’s Gloria Valdez began the rally with a single and was brought home by a Boyd double. Boyd then scored off of a base hit from Cutler, who was brought home, courtesy of a Bumpass single. Coltrain capped the inning with a solo home run to make the score 9-6 in Unity’s favor.

Coltrain was the star of the game for the Warriors. The senior was 3-for-3 at the plate, with two doubles, a home run and three RBI. Bumpass and Cutler chipped in with two hits each.

The TEACH baseball team honors its seniors in victory…