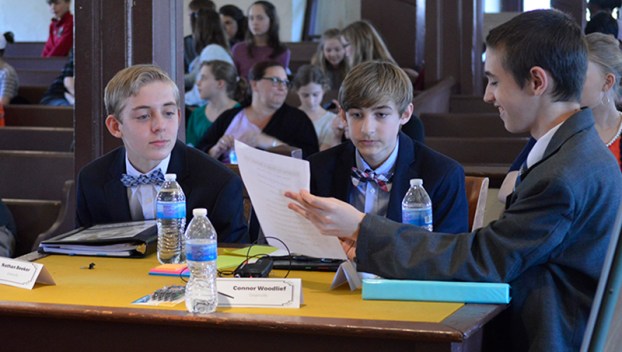 Crisp pressed suits, legal pads and pens, a courtroom of spectators closely following every word; teams of young attorneys pour through their notes and the fate of the accused hangs in the balance.

This was the scene at the historic Beaufort County Courthouse on Friday. While it may sound like a gripping legal drama from the pages of John Grisham, the attorneys, witnesses and bailiffs were all eighth-grade students from Classical Conversations, a local Christian homeschool community made up of students from Carteret, Pitt and Beaufort counties.

“Students were able to articulate two benefits from the event,” Greenville Classical Conversations organizer Rachel Wood said. “One is understanding our legal system and having a better appreciation for it. But also having those rhetorical skills of being able to speak in public like that, speaking well and loudly.”

Together, these students were tasked with studying the fictitious murder case of State v. Barrett, taking on the roles of prosecutors, defense attorneys, witnesses and bailiffs. Studying for the trial began in December, with students learning courtroom procedure, the law and the sordid details of the case. Tackling tough themes such as domestic violence, alcohol abuse, love affairs and murder, the mock trial was no laughing matter.

“It was really a neat process and a lot of hard work in a very short amount of time,” Wood said. “Most competitive mock trial teams have close to a year to prepare.”

Assisting in the event were District Court Judge Chris McLendon, who oversaw the courtroom proceedings, and Brown Library youth-services librarian Terry Rollins, who offered a brief history of the courthouse prior to the event. Jury members for the event were likewise made up of adult volunteers.

“It was really neat that we were able to use the historic courthouse and that two communities from outside of Washington were able to come together in Washington to experience something that most kids this age have never had to do,” Wood said.

Hospital board moving towards dissolution

The board that has overseen the hospital in Washington for decades is officially in the process of being disbanded. Commissioners... read more