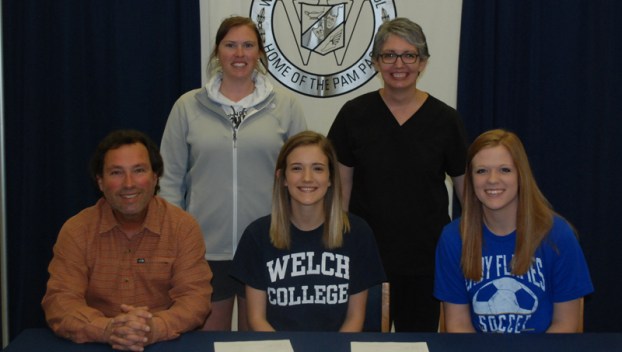 Sydney Walker’s high school career may be coming to an end, but the Washington soccer player will have an opportunity to score goals at the collegiate level after signing to play at Welch College on Tuesday.

The forward/midfielder is part of the first signing class for Welch’s women’s soccer team, as the 2018-2019 season will be the first for the private college based in Gallatin, Tennessee. It is something Walker is looking forward to be a part of. She said helping get the team started and improving herself as a player are what she’s most eager about.

While Walker’s primary objective for next year is to nail down a starting spot, she’s not quite ready to put an exact number on how many times she wants to score next year.

“I haven’t made any goals, as far as [scoring] actual goals, but I hope to make some,” Walker said. 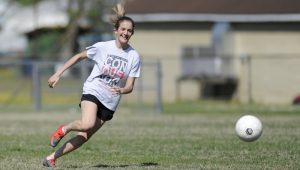 ALL SMILES: Welch College signee Sydney Walker chases down the ball at practice for the Washington girls’ soccer team. The Pam Pack is 7-0 in the conference and looking to make a deep run in the playoffs. (Ashley Vansant|Daily News)

Walker, who creates charcoal drawings in her spare time that have been showcased at the Turnage Theater in Washington, said she plans on majoring in business. But she’s sees herself eventually going into interior design.

Even though Welch College’s women’s soccer program is in its infancy, Walker is no stranger to the school. Multiple family members have attended Welch College, including her older sister, who is currently enrolled there.

Due to her ties to Welch College, Walker already has a relationship with the women’s soccer coach, Leslie Nichols. Walker and Nichols have actually known each other for several years, which helped Nichols make the decision to bring Walker into the program.

“We always look for, when we’re looking for athletes, we look for girls who are good off the field and also on the field, and automatically whenever I was thinking about the soccer program over the next couple of years, Sydney was one of the first ones I thought of,” Nichols said. “She’s a sheer athlete, she’s good on the field, she knows what to do; she’s also a leader. But she’s also a good girl off the field, and so I think she’ll be a great addition, not only to Welch College soccer, but also to Welch College.”