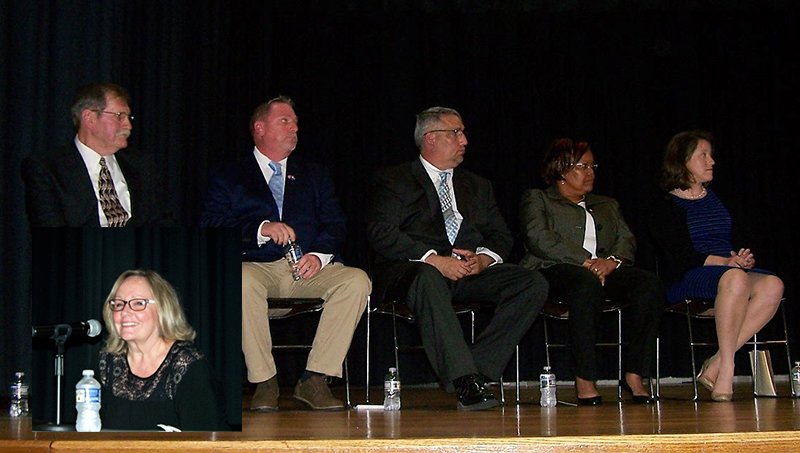 MEET THE CANDIDATES NIGHT on April 19 brought out five contenders for public office in Tyrrell County. From left are Nathan McPeak, Joey Elliott, and Kevin Sawyer, running for the Democratic nomination for sheriff; and Robin Dunbar and Karen Clough, seeking re-election to the board of education. KIM WHEELER moderated the Meet the Candidates Night in VanHorne Auditorium April 19, sponsored by the Greater Tyrrell County Chamber of Commerce. (R. McClees photo)

The three Democrats seeking the sheriff’s office — Joey Elliott, Nathan McPeak, and Kevin Sawyer — and two of the four candidates for election to three seats on the board of education — Karen Clough and Robin Dunbar — each spoke for two minutes.

Kim Wheeler then asked the aspiring officeholders questions that audience members had submitted before the program began. The 15 questions were specific to the offices being sought rather than to individual candidates, and each candidate responded to each question.

Following the Q&A, candidates made one-minute closing appeals, and the program ended after 90 minutes.

Kirstin Bradley, president of the Greater Tyrrell County Chamber of Commerce, event sponsor, opened the program by welcoming those who attended. She then introduced Debbie Swain, county elections director, who explained the three ballots being used in this primary.

Swain reported that 27 voters turned out on the first day of early voting, which continues in her office in the courthouse through May 5. Voting in precincts will be on May 8.

Gayle Ryan and Sharon Spruill were timekeepers, informing candidates from their front-row seats by holding up a yellow card when 30 seconds remained and red cards when the time of each had expired.

Bradley and Tim Nielsen solicited questions for the candidates as people entered the foyer.

Two candidates for election to the board of education — incumbent Carlos Armstrong and newcomer Kisha Norman — did not attend.

Candidates whose names are not on the May 8 primary ballot will be invited to speak and answer questions before the general election. They are incumbent Democratic commissioner Nina Griswell and Republican newcomer Jordan Davis, running for two seats; and Angie Sexton, who is unopposed in her quest for a third term as clerk of Superior Court.

Overview of opioids in Tyrrell County