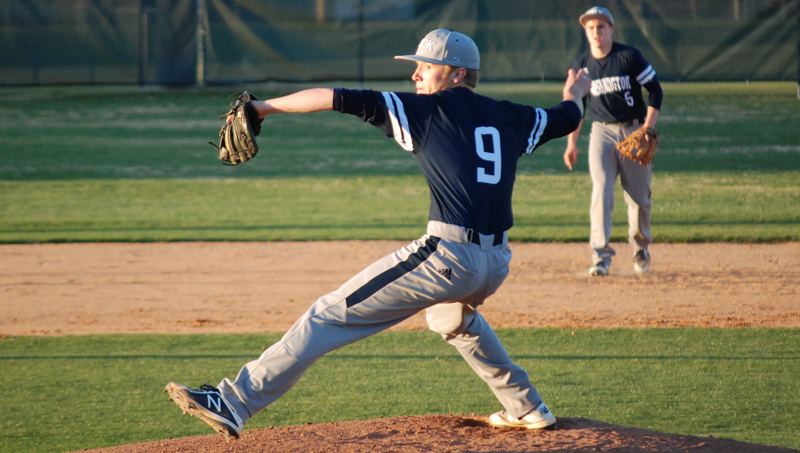 ON THE MOUND: Washington’s Chris Sulc is about to fire in a pitch in a game against Ayden-Grifton last week. The senior hopes to help lead the Pam Pack to victory over South Lenoir on Thursday. (Sean Finnerty|Daily News)

Washington’s baseball and softball teams find themselves in similar situations that also have a key difference. They are both playing conference foe South Lenoir tomorrow in rescheduled games that were moved from last Tuesday due to rain.

Both games hold significance in the fact they can go a long way in deciding seeding for the playoffs with only two games remaining. Tomorrow’s matchups also provide a chance at revenge for an earlier loss.

No matter how similar or different their scenarios are, a victory on Thursday would be significant to both squads as the season winds down and the playoffs loom around the corner.

Washington, with a record of 11-5, 5-4 before playing non-conference foe South Central tonight, go into tomorrow’s game tied with South Lenoir (9-7, 5-4) for fourth in the conference. Only teams that finish in the top four earn an automatic bid to the playoffs, making this game especially important for both teams, as only two games will remain after tonight.

The Pam Pack had been going through a rough patch, losing three straight conference games and falling out of its tie for first place, but a 7-1 win over Ayden-Grifton last Friday got Washington back on track. Washington couldn’t get its offense going or drive home men in scoring position during the three-game slide, but several 2-RBI hits in last Friday’s game show that the Pam Pack is rounding back into form.

The Blue Devils enter tomorrow’s game having lost its last two, including a 15-0 shellacking at the hands of West Craven (14-5, 5-3), who sits third in the conference and half a game ahead of Washington and South Lenoir in the standings. While the Blue Devils may not be in the best form right now, they can take confidence from the fact they beat the Pam Pack 4-0 at home earlier in the year.

Even though Washington lost its last matchup against South Lenoir by four runs, the Pam Pack feels it can reverse roles this game. Washington coach Kevin Leggett said if they clean up the errors they made in the game earlier in the year and come up with some big hits, then his team is capable of getting the win.

Both Washington and South Lenoir’s playoff lives hang in the balance, so expect a tight and hard fought affair.

Washington (15-1, 9-0) comes into Thursday’s game full of confidence, as it’s on a five-game win streak. The Pam Pack has swept aside almost everyone it’s played, regularly defeating opponents by a double-digit margin. Only three of Washington’s games, including its only loss, have been decided by two runs or less.

Emme Davis, Mary Dixon and Summer Campbell have led the Pam Pack offense this year. Campbell’s 28 hits lead the team, while Davis (27) and Dixon (26) are second and third. Kaylee Elks’s 19 RBI are good for first on the team, while Campbell, Davis and Dixon are close behind with 18, 17 and 15 respectively.

South Lenoir (14-2, 8-1) is right behind Washington in the conference standings and hopes to use this game as a chance to take a share of first place. The Blue Devils are even more prolific than the Pam Pack, having scored 210 runs this season, compared to Washington’s 170. Tomorrow’s game doesn’t just provide South Lenoir an opportunity to tie for first place; it is also a chance for revenge.

The Blue Devils last loss was at home to the Pam Pack a month ago. The final score was 7-1 but the game was much closer than that. Washington trailed in the sixth, before scoring and forcing an extra inning. Once in extra innings, the Pam Pack exploded for six runs, making the game not seem like the tight matchup it was. Expect another close game as these two teams battle for first in the conference.