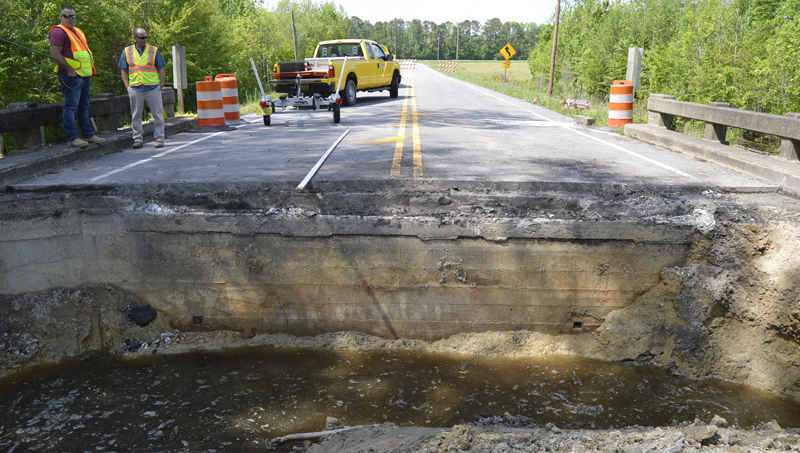 BIG HOLE: A sinkhole, which opened Wednesday evening on N.C. Highway 33 near Dixon Road, will likely divert traffic through next week. DOT crew members say a culvert blocked by a beaver dam may have caused the washout. (Matt Debnam/Daily News)

CHOCOWINITY — A road-spanning sinkhole, which opened up Wednesday on N.C. Highway 33, will likely leave commuters on a seven-mile detour route for a least a week, according to the NCDOT.

The sinkhole is located on the eastern shore of Cindy Edwards Branch, half a mile east of Dixon Road near Chocowinity. The road is closed to all except local traffic between Windmill Road and Dixon Road.

According to NCDOT Maintenance Operations Support Engineer Jeremy Stroud, a seven-foot tall beaver dam blocking a culvert running under the highway helped create the conditions for the sinkhole. With water taking the path of least resistance, a whirlpool formed, sucking soil from underneath the highway.

“With the water moving and this sandy material, it created a void,” Stroud said.

Stroud said that NCDOT had responded to reports of a pothole at the location on Wednesday morning, with the hole opening up that evening. When the crews went to work, concrete was spanning the hole from a previous paving.

The Raleigh-based Structures Management Unit of NCDOT visited Beaufort County on Wednesday, along with divers who helped assess the damage beneath the waterline. With these assessments complete, Stroud says NCDOT plans to fill the hole with concrete to prevent it from washing out again.

He advised commuters to obey the work zone signs, avoid the area and refrain from moving closure signs.

“If it’s the middle of the night and someone moves those signs, they’re going to be in a mess,” Stroud said. “That’s why we have barricades up. Don’t move them and try to go around. It’s the weekend and this is an inconvenience, but I would just urge people not to do that.”