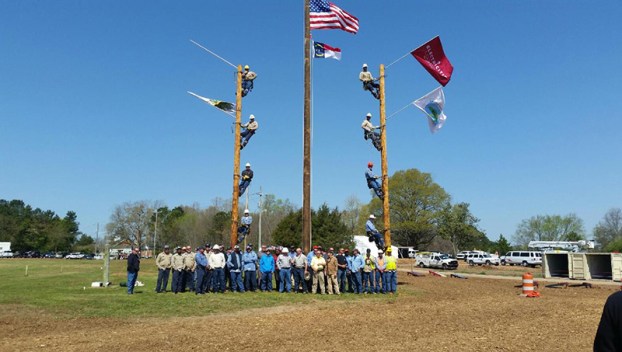 PREPARATION: The national Public Power Lineworkers Rodeo will be held in Wake Forest this weekend. Pictured are some of the lineworkers who helped build the rodeo site, erecting more than 200 poles for the Saturday competition. (Jeff Clark)

Lineworkers from across the U.S. will descend on Wake Forest today to compete for top honors at the Public Power Lineworkers Rodeo. Among them will be a few linemen and apprentices from Washington Utilities.

It’s quite a production, according to Washington Utilities Director Jeff Clark.

“It’s set up like a rodeo event, but there’s no horses or cows,” he laughed.

At the Wake Forest site, more than 200 utility poles were erected for the rodeo, where 75 foreman teams and 150 apprentices will be competing in a few categories, among them hanging transformers, rope tosses and rescuing the dummy, “Rescue Randy,” from atop a utility pole, simulating the live rescue of an injured worker.

“It’s such a large event and it’s over in one day, but we’ve probably been building the site for three months,” Clark said. “It takes quite a bit to pull it off.”

The goal is to demonstrate how quickly and safely linemen and apprentices can do their jobs, at the nation’s premier competition of public power utility workers. This year’s event is hosted by the American Public Power Association, ElectriCities, North Carolina Association of Municipal Electrical Systems and the Town of Wake Forest.

“Being a lineworker requires tremendous skill and knowledge. This is a great opportunity for customers to get an up-close look at workers as they showcase their talents,” said ElectriCities CEO Roy Jones, in a press release. “We are honored to host this event in North Carolina for the first time.”

A 36-year veteran lineman, Clark is attending as a judge, as only a lineman can accurately assess the abilities of the competitors and their work.

“They need judges that actually know what they’re doing up there,” Clark said.

Clark said Washington Utilities currently has a lot of younger linemen who are a little hesitant to compete on the national scale.

“We’re hoping to break them of that at our local rodeo in a couple of weeks,” Clark said.

The NCAMES rodeo will be held May 15-18, in Hickory. Clark said there are typically 60 to 80 competitors at the state event, the winners of which go to the national Public Power Lineworkers Rodeo. This year’s an exception as it’s the first time the national event has been held in North Carolina.

The rodeo is not limited to those who work in the field. It’s a family event, as well, featuring food trucks and a kids’ Fun Zone, with face-painting, slides, games and activities, where aspiring young lineworkers can try their hands at pole climbing and rope tossing.

The Public Power Lineworkers Rodeo is free and open to the public.

One in 10 Americans knows someone who has died from an opioid overdose. More than 2.1 million people suffer from... read more