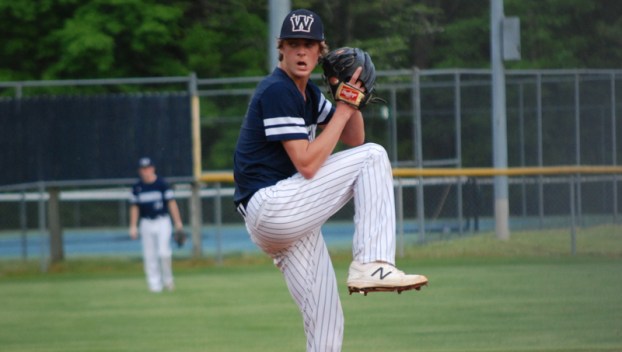 ON THE MOUND: Washington’s Logan Everette stares down a South Lenoir batter as he goes through his windup. The junior pitched four innings in the 7-0 loss. (Sean Finnerty|Daily News)

“We’re just not hitting the ball. We gave up a few [runs] at the end of the game, but if we’re hitting the ball in the game, those probably don’t ever happen,” Washington head coach Kevin Leggett said. “We’re working on hitting every day for most of our practice but we’re just not stepping up right now at the plate.”

The Pam Pack (11-6, 5-5) managed only three hits after seemingly breaking out of its slump in last week’s 7-1 win over Ayden-Grifton. Chris Sulc was the only Washington batter who had any sort of success against South Lenoir (10-7, 6-4). The senior managed to go 2-for-3 at the plate. The Pam Pack’s only other hit came from Frederick Holscher, who hit a single in his three at-bats.

Even after snapping its three-game losing streak with the win over Ayden-Grifton last week, Washington still can’t shake its hitting woes. The Pam Pack’s coach pointed to two factors contributing to his team’s recent lack of success at the plate.

“We’ve had some guys in a slump for a little while and I think those guys are starting to press a little bit. When you’re pressing it’s hard to get out of a slump,” Leggett said. “You just have to look for the little things, like little bloopers, but we’re just not getting those to fall in right now.”

Regardless of Washington’s struggles at the plate coming into the game, South Lenoir’s Camden Noble played a huge part in silencing the Pam Pack’s bats. The starting pitcher pitched a complete game, allowing just three hits and striking out ten batters. The senior also contributed on the offensive side of things, hitting two doubles.

“[Noble] threw his rear end off,” Combs said. “We played pretty sound defensively, we made zero errors. When we play clean, we’re tough to beat.”

South Lenoir slowly built a 3-0 lead through the first five innings, highlighted by an Everett Oliver solo home run in the second. The Blue Devils then blew the game open in the top of the seventh, scoring four runs to effectively put the game out of reach.

With the loss, Washington drops out of the top four in the conference into fifth place, with two games remaining in the regular season. Only the top four teams in the Eastern Carolina 2A conference earn an automatic bid to the playoffs. The Pam Pack will return to action on Tuesday, when it travels to Kinston to take on the Vikings (0-15, 0-9) at 7 p.m.