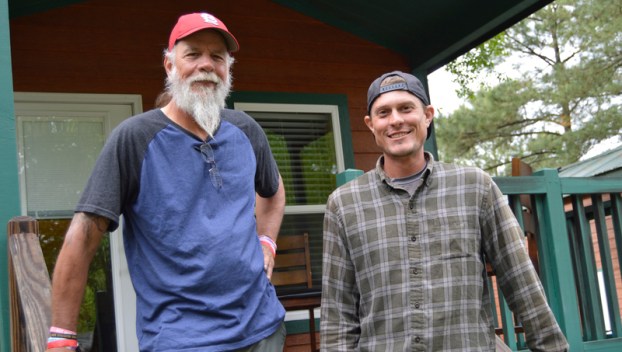 RESPITE: John Azarolo and Brett Bramble found sanctuary at Twin Lakes Campground during heavy rains on Monday, thanks to the efforts of Same Power Ministries in Chocowinity. (Matt Debnam/Daily News)

Two special guests made their way through Beaufort County earlier this week, a short leg of a 2,400-mile journey that saw Brett Bramble and John Azerolo walk the length of the Eastern Seaboard. On Jan. 27, the pair set out from Key West, embarking on a trip that will bring them to Fort Kent, Maine, sometime in August.

Their purpose is simple, yet profound — to raise awareness of drug overdoses in the United States.

For Bramble, the walk is personal. He lost his sister, Brittany, to drug overdose in 2014. On the second anniversary of her death in 2016, he set out on a walk from Deleware to San Francisco, sharing his sister’s story as he went.

“It drove me to do everything I could to stop it from happening to another family,” Bramble said. “I walked across the country to share my love with everybody along the way. I healed a lot and learned a lot about the people of this country; how good they are.”

Azarolo, who himself set out on a walk for St. Jude in 2014, was forced to end that walk prematurely due to health concerns. With “a hole” left behind by that incomplete walk, he was interested in joining Bramble in the cause. As he learned more about the opioid epidemic, Azarolo was especially touched by grandparents raising their grandchildren as a result of overdoses.

“All my efforts are going to every child that has been left motherless and fatherless,” Azarolo said. “Hardly a day goes by that I don’t add another one. As soon as I hear about them, I put them here in my heart, and I carry them with me all the way to Maine.” 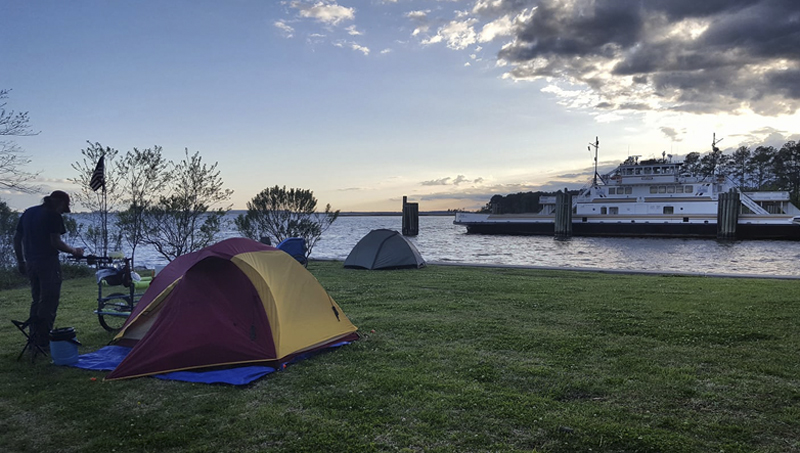 CAMPING ON THE PAMLICO: After taking the ferry from Aurora to Bayview, Bramble and Azarolo spent a night camped on the shores of the Pamlico River. (Brett Bramble Walks)

While the two are doing a lot to raise awareness of the issue, they are also raising money for a good cause. Donations collected during their walk will benefit Freedom to Grow Retreat, a nonprofit farm retreat in north Georgia where individuals with substance abuse issues can live for up to nine months during recovery.

Although their time in Beaufort County was brief, the two found a warm welcome. With rain impending on Monday, they found refuge at Twin Lakes Campground in Chocowinity, where the folks at Same Power Ministry found them a cabin. Setting back on the road, they made their way to Aurora on Wednesday, crossing the Pamlico on the ferry to Bayview. The two made camp there that night before continuing their journey.

To learn more about Freedom to Grow, visit www.freedometogrowretreat.org.

A wave of blue, sweeping down Water and Main streets, created a swell of sounds and activity on Thursday. While... read more