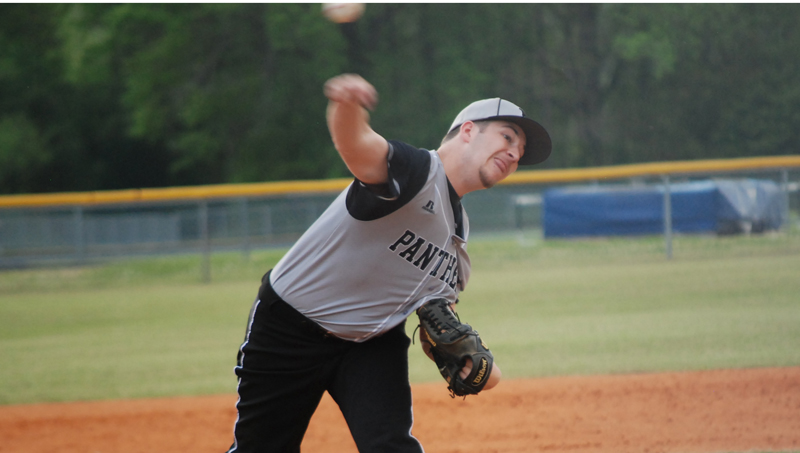 FIRING IT IN: Northside’s Zach Woolard throws a pitch during a game against Southside earlier this season. Woolard racked up seven strikeouts in Wednesday's 4-1 win over Lakewood. (Sean Finnerty|Daily News)

PINETOWN—A commanding performance on the mound from Zach Woolard, along with good defensive work in the field, helped Northside eke out a 2-1 home victory over rival Southside Friday night.

“Tonight we had to gut it out on the defensive end and did pretty well,” Northside head coach Keith Boyd said. “Zach Woolard pitched well. [He] got some ground balls and kids made plays behind him.”

Woolard pitched all seven innings for Northside (15-5, 8-2) on Friday. He limited Southside (7-13,3-8) to only four hits, while striking out seven Seahawks. The senior did walk three batters, one of which ended up scoring Southside’s only run of the game.

The Seahawks’ Will Warren put in a solid shift on the mound as well. The junior allowed two earned runs on nine hits in six innings of work. He recorded one strikeout, while walking three Panthers. Warren’s game wasn’t as statistically impressive as Woolard’s, but the Seahawk pitcher got the outs when he needed them, forcing Northside to strand eight runners on base.

While the efforts of Woolard and his defense propelled the Panthers to victory, it was a mistake by both early on that led to the Seahawks scoring in the first. Woolard began the game by walking both Cody Modlin and Demitrious Ebron. Shortly after, Warren hit into a fielder’s choice. Northside attempted to make the double play, but the throw to first sailed over Zach Griffin’s head allowing, Modlin to come home to open the game’s scoring.

Even though the Panthers had nine hits in the game, they struggled to connect when they had runners in position to score. But in the fourth inning Northside finally broke through. Tanner Alligood began the inning by drawing a walk and then stealing second to get in scoring position. Dawson Boyd followed with a base hit, scoring Alligood and tying the game at 1-1.

The Panthers’ hitters seemed to finally get in a groove, as Braedon Burbage followed up with a single of his own, moving Dawson Boyd to third. Reg Bishop then scored Boyd with a base hit, giving Northside the 2-1 lead. Northside had a chance to score even more runs, having runners on second and third, but Warren got himself out of trouble by forcing Matthew Marslender to ground out.

Despite not generating much offense for most of the game, Southside had an opportunity to tie, or even take the lead, in the top of the seventh. The inning started as if it’d be three easy outs, as Woolard forced two quick groundouts to put the Seahawks’ backs against the wall.

But Dylan Humbles threw his team a lifeline by hitting a sharp single in the hole past a sprawling Bishop. Modlin followed that up with a single of his own, moving Humbles to third. Modlin then stole second, creating the possibility of Southside taking the lead with a good hit. But with the pressure on, Woolard rose to the occasion and struck out Ebron to finish off the game.