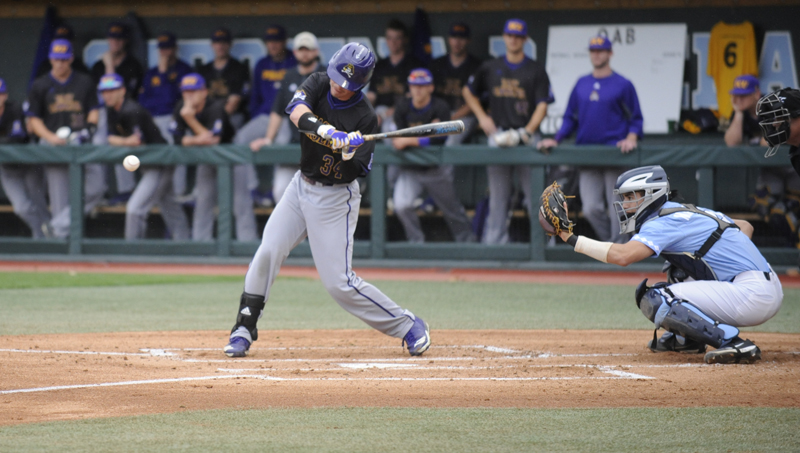 TEEING OFF: ECU’S Chandler Jenkins sees a pitch to his bat at North Carolina earlier in the year. (Michael Prunka|Daily News)

East Carolina completed its ugliest home series of the season, filled with lackluster at-bats, poor pitching performances and fielding errors, with a 6-5 loss Sunday, resulting in a series sweep at the hands of the University of Houston.

“The game today really wasn’t close at all. I’m embarrassed the way we played today,” ECU head coach Cliff Godwin said. “It was the most uninspired baseball game that I have been associated with here at East Carolina.”

Despite playing poorly, No. 12 ECU (30-12, 8-7 American Athletic Conference) actually took the lead over Houston (28-16, 13-5 AAC) in Sunday’s game, scoring twice in the bottom of the fourth. ECU loaded the bases, thanks to a pair of walks and a Jake Washer base hit. Andrew Henrickson took advantage of the situation, bringing home Dwanya Williams-Sutton with a single off of Houston’s Ryan Randel.

The Pirates scored their second run, courtesy of an Alec Burleson sacrifice fly that plated Washer. But ECU lost out on a chance to score even more. Henrickson took off for third when Burlseon connected on his sacrifice fly, but Henricksn couldn’t make it back to second base before the throw from the Houston outfield, resulting in the final out of the inning.

The Cougars took no time tying the game as they plated two runs in the top of the fifth. A Grayson Padgett groundout brought Tyler Bielamowicz, home to score. Houston’s Connor Hollis, who gave the Pirates problems at the plate all weekend, followed up with an RBI-single, tying the game 2-2. Houston added four more runs in the seventh. The scoring spree was highlighted by a Joe Davis’ three-run home run.

The Pirates tried to make it interesting, scoring three runs in the bottom of the ninth. Then Spencer Brickhouse, at the plate with a man on, had an opportunity to tie the score. But the designated hitter flew out, bringing the game to a close.

Houston already claimed the series win on Saturday with a 3-1 victory. The Cougars scored two runs early in the top of the second, with the help of a few errors by the Pirates. Houston used three consecutive bunts to advance and score its runs from Padgett and Bielamowicz. Padgett’s run was aided by a wild pitch and Bielamowicz’s score came as the result of a suicide squeeze.

A Brickhouse home run, his second in the series, was the Pirates’ lone run on Saturday. However, Hollis added an insurance run for Houston in the top of the ninth, before Joey Pulido closed out the game in the bottom of the ninth.

The opening game of the series was the best for ECU, but the Pirates still came up short in the 5-4 Friday night defeat. ECU started strong, scoring three runs in the second, but the Cougars’ five runs scored during the game’s middle innings was too much to overcome for ECU.

The top of the sixth inning posed problems for the Pirates and especially relief pitcher Ryan Ross, who had his worst outing of the season, lasting just 0.1 innings.The first batter Ross faced, Coldiron, hit a sacrifice fly to score Bielamowicz. Wendell Champion hit a 2-RBI home run in the next at-bat, giving Houston the lead at 5-4. Ross continued to give up a single and a double before being pulled for Trey Benton.

Benton escaped the inning without any more damage. But after scoring three runs early, the run support was not there for the Pirates, giving them the series opening loss.