Jimmy Williams in NFL after signing with Denver 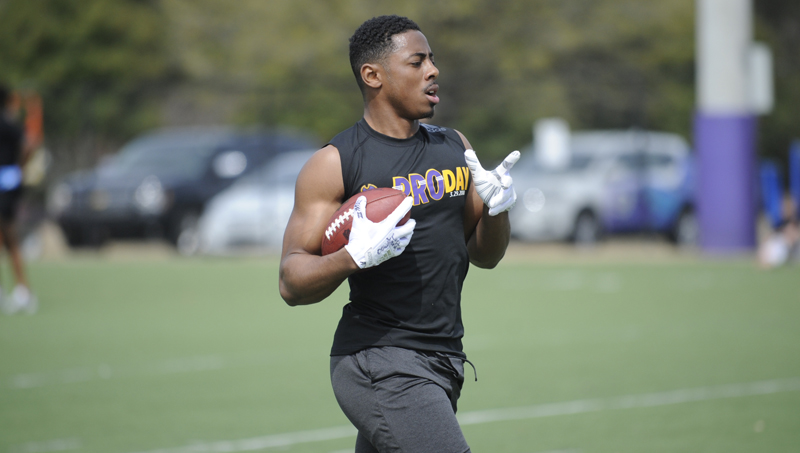 NOW A PRO: From playing for the Pam Pack and then the Pirates, Washington native Jimmy Williams now finds himself with the chance to play in the NFL. Williams signed with the Denver Broncos as an undrafted free agent over the weekend. Jimmy Williams in NFL after signing with Denver. (Michael Prunka | Daily News)

Jimmy Williams will get a chance to live out his dream of playing professional football, after the former Pam Pack and ECU wide receiver signed with the Denver Broncos over the weekend.

Williams, who graduated from Washington High School in 2013 and went on to play five seasons for the Pirates, received a call from his agent Saturday night. It was then that Williams learned the Broncos wanted to sign him as an undrafted free agent.

Hearing the news that Denver wanted to make Williams a Bronco lifted a weight off the wide receiver’s shoulders. He was about to start living his dream of being a pro football player.

“[I] was like, alright, now I’m not sitting around waiting all day anymore. The hard part is over because the waiting is the hard part,” Williams said. “I’m going to be a Bronco so I’m relieved.”

The Washington native spent the draft at his house surrounded by family and friends, waiting to see if he’d get a call from an NFL team.

“It was really simple; it was nothing special. I just wanted to have everybody around to kind of kill the tension that I had, the anxiety that I had,” Williams said. We had [the NFL draft] on the TV, we kept track of it and everything, but we were really just outside having a good time, waiting on everything to sort its way out.”

Denver was one of several teams that showed an interest in Williams, reaching out through text or phone call. Williams even worked out for several teams, including Dallas, Arizona and Detroit.

But it was the Broncos who showed him the most interest. They stayed in touch during the buildup to the draft, contacting Williams a couple times a month. But it was when Zach Azzanni, Denver’s wide receivers coach, called, that Williams really knew the Broncos’ interest was serious.

“[Denver] reached out to me really early in the process, letting me know they kind of liked my skill set, liked what I do,” Williams said. “I finally talked to the receivers’ coach the day before, or a couple days before the draft. That definitely showed their interest. Once I talked to Coach, he let me know that they were interested and he liked my film.”

Former Washington High School football coach Sport Sawyer said Williams was always a playmaker. Even as a freshman playing for the scout team, the Pam Pack’s varsity players had a tough time trying to stop Williams. Sawyer remembers a play against White Oak during Williams’ senior year that really impressed and showed off Williams’ natural ability.

“Our quarterback threw it to [Williams] and as soon as he caught it, it was like a bullet going out of a chamber,” Sawyer said. “He flew down the field untouched and it was like ‘wow, look at that.’”

Williams said he hasn’t set any goals for himself yet, but if he keeps his nose to the grindstone, he said everything else will fall in place.