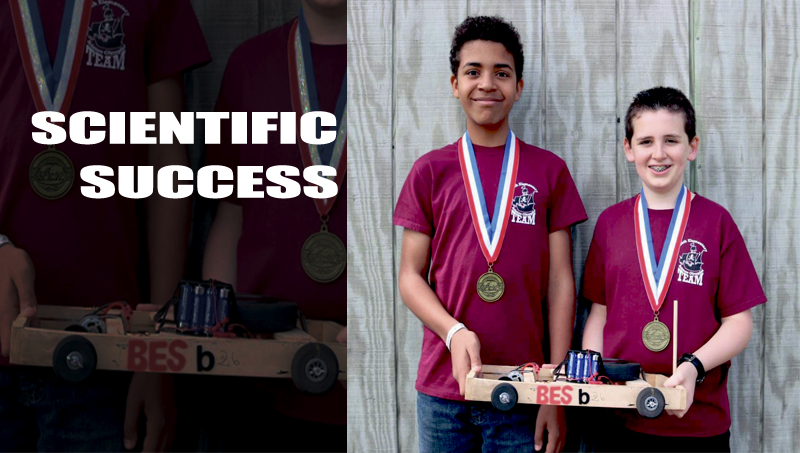 Could you make a battery-powered car travel precisely 10 meters and stop at a line with no remote control? Would you be able to fashion a bucket from duct tape that will suspend a heavy weight? How far could you fly a ping-pong ball with a parachute attached to it?

These strange (albeit scientifically demanding) tasks are but a small sample of the challenges faced by local students during the recent North Carolina Science Olympiad state competition in Raleigh on April 20 and 21.

Bringing together middle and high school students from across the state for a day of competition, Beaufort County was well represented at the event with students participating from Bath Elementary School, Northside High School, North East Elementary and Terra Ceia Christian School.

Of these schools, Bath Elementary was undoubtedly the best represented from Beaufort County, taking an 18-member team to competition this year. That group od students competed in 24 events during the course of the weekend, holding their own against big-city middles schools from throughout the state. Two students, Alyjah West and Zander Geritz, earned first place in the battery buggy event.

“We are very proud of them,” BES teacher Melissa Boyd said of her students. “ It’s tough. These events are not easy. They’re taking high school and college level tests and competing in events where they have to build, analyze, reform and retry. It’s a lot of higher order thinking and a lot of STEM involved.”

“They have to think on the fly,” Van Staalduinen said. “It ties in looking at the scientific method and being creative. ‘Is this going to work?’ ‘Is this the best thing to do?’ I was impressed with their ability and their attempt.”

In order to qualify for state competition, students participated at a regional competition at East Carolina University in February. Top placers in the state tournament will be eligible to compete at the national Science Olympiad in Colorado later this month.