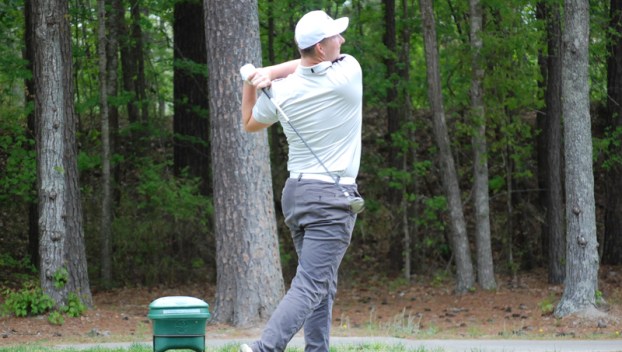 PERFECT FORM: Northside’s Bryson Radcliffe follows through as he watches his tee shot travel through the air at the Coastal Plains 1A Conference Championship last week. Radcliffe qualified Monday to play in the NCHSAA 1A State Championship. (Sean Finnerty | Daily News)

WINDSOR—The Southside golf team finished third at the 1A East Regional Championship in Windsor on Monday, earning the Seahawks an invitation to the NCHSAA 1A State Championship next week.

With a combined score of 379 on Monday, the Southside golf team, consisting of Luke Matthews, Trey Branch, Colt Dixon and Santiago Lengyel, qualified to go to Foxfire Golf & Resort in Windsor for the state championship. Joining the Seahawks in Windsor will be Northside’s Bryson Radcliffe and Braeden Cooper, who qualified as individuals. Brennan Baldwin, the third Panther competing at the regional tournament as an individual, missed making it to the state championship by five strokes.

Franklin Academy won the regional championship with a combined team score of 351. Riverside, who finished second behind Southside in last week’s Coastal Plains 1A Conference Championship, took second with a score of 371. As the top three finishers, Franklin Academy, Riverside and Southside all received an invitation to the state championship to compete as a team. Coming in fourth, Hobbton (385) missed out on a chance to go to state’s by six strokes.

Despite not having any team members finish in the top three, the Seahawks scored well enough as a team to take third. Matthews (88), who finished tied for fourth, led Southside on Monday. Branch (92) took ninth place, while Dixon and Lengyel contributed with scores of 99 and 100, respectively.

Rosewood’s Cameron Klagas (81) finished with the best individual score at the regional championship, followed by Franklin Academy’s Daniel Nunn (83) and Jacob Girouard (84). Northside’s Radcliffe (88) and Cooper (91) finished tied for fourth and eighth, respectively, earning them spots to compete individually in Windsor. Along with the top three teams, the top six individuals not on the qualifying teams receive bids to play in the state championship as well.

The NCHSAA 1A State Championship will be held next Monday and Tuesday at Foxfire Golf & Resort in Windsor. The teams and individuals will play 18 holes both days, with the best cumulative score deciding the championship-winning team and individual.

PINETOWN—Whittney Cromwell will continue on with her academic and athletic careers next school year, as the Northside softball player signed... read more