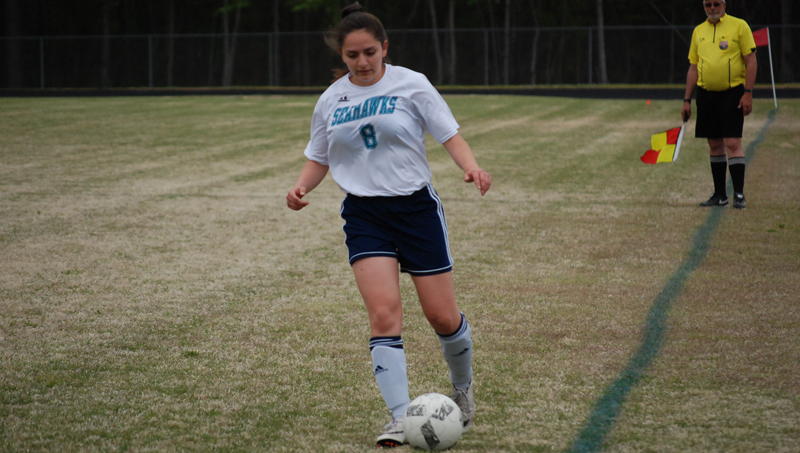 EYES ON THE BALL: Southside’s Sindy Chavez dribbles the ball up the sideline in the Seahawks’ matchup against Tarboro from earlier in the year. Chavez is Southside’s leading scorer with 12 goals. (Sean Finnerty | Daily News)

TARBORO—The Southside girls’ soccer team, led by the efforts of Carleigh Findley, concluded its conference schedule with a 3-0 victory at Tarboro on Monday.

It was the second time in a week that the Seahawks (8-8, 2-0) defeated Coastal Plains 1A rival Tarboro (0-8, 0-2), after beating the Vikings 5-1 at home on April 23. Sophomore Iyari Mondragon opened the game’s scoring, netting a goal, her seventh of the season, in the game’s opening half. Junior Carleigh Findley, who’s spent much of the season playing in goal, played in the field on Monday and assisted on Mondragon’s goal.

Not content with a one-goal advantage, the Seahawks put two more goals past the Vikings in the second half. Findley went from provider to scorer to increase Southside’s lead to two goals. Kaitlyn Leo capped the game’s scoring, grabbing her first goal of the season.

Despite losing by a three-goal margin, Tarboro didn’t go down without a fight. Keely Bennet, Findley’s replacement at goalkeeper, was called into action several times. The junior finished the game with two saves.

Southside will conclude its regular season with a road game at Cape Hatteras High School on Thursday at 5 p.m.

Jimmy Williams in NFL after signing with Denver