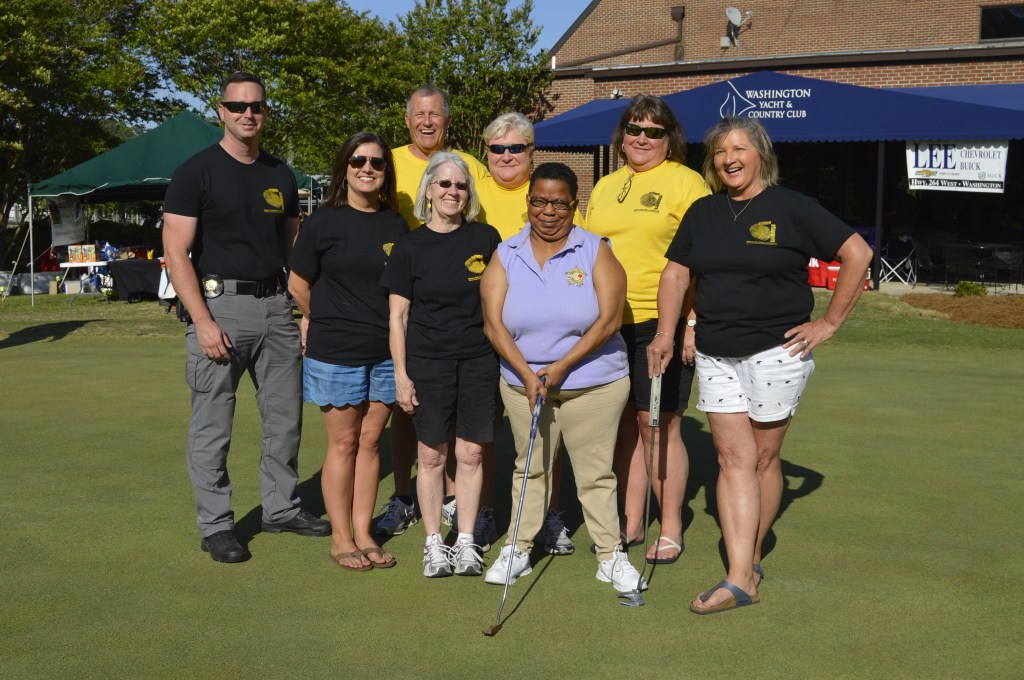 Golf courses typically aren’t the scene of many high-profile crimes, but a tournament at Washington Yacht & Country Club on Wednesday may help solve major cases in the future.

Hosting 21 four-person teams for its 22nd-annual golf tournament, Beaufort County Crimestoppers raised approximately $10,000, all of which will be used to pay out cash rewards for individuals who anonymously submit tips that lead to arrests.

While Crimestoppers works in conjunction with the Beaufort County Sheriff’s Office, the BCSO does not administer the program. Rather, a volunteer civilian board oversees Crimestoppers, managing funds and facilitating the program. BCSO Lt. Kelly Cox acts as the public face of the program, as well as a liaison between the board and the BCSO.

“People think it’s through the sheriff’s office, but we’re just part of the resources to help get the information out,” Cox said. “It’s not Sheriff Coleman’s Crimestoppers program. It’s the whole county, and it’s ran by people who volunteer their time to help make Crimestoppers what it is.”

While the BCSO allows some resources to be used for the program, ultimately Crimestoppers is a win-win for taxpayers and local law enforcement. Money used for rewards is obtained solely through fundraisers or private donations, at no cost to the average resident. In turn, tips submitted to Crimestoppers can save local agencies hundreds of man-hours, allowing for better use of resources.

“When we get that information, it leads them in the right direction,” Crimestoppers board member and former liaison Karen Ball said. “We’re giving them the leads to follow up on, which saves taxpayers a lot of money.”

Beyond the dollars and cents, Crimestopper tips can also provide something far more valuable for victims and their families — justice. In serious cases such as homicides and sexual assaults, anonymous tips can often break a case.

So how does it work?

For those with serious concerns about remaining anonymous, Crimestoppers makes that a guarantee. Tips submitted via text or phone call are processed through servers in Canada, ensuring that a phone number will not be associated with a tip.

Since its inception under Matt Sopher in 1997, the Beaufort County Crimestoppers program has paid out $90,000 in cash rewards for information leading to the recovery of property worth approximately $800,000.

Individuals with information regarding a crime can text code word BCSO131 to 274637 or call 252-974-6400. Web tips can be submitted at www.beaufortcountycrimestoppers.com. Upon follow-up and arrest, tippers will be given a security code, which can be redeemed for cash at CresCom Bank.